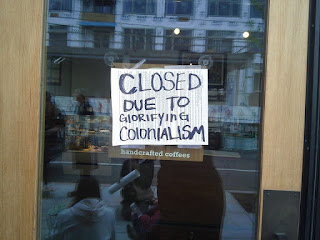 A restaurant in Portland, Oregon is being targeted by protesters who say its British Empire theme is offensive to minorities.

Saffron Colonial focuses on English cuisine, but in addition to afternoon teas and English breakfasts the restaurant also incorporates “globally inspired dishes from the height of the British Empire,” such as a Burmese curry dish. Owner Sally Krantz says she’s interested in historical dishes and wants her restaurant to reflect the unique dishes and meal combinations created through the existence of the British Empire.

And that has some Portland residents outraged.

A March 19 open letter by Stephanie Dünx lays out the core criticisms of Saffron’s theme.