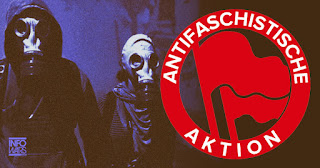 ANTIFA has roots in the German communist party and takes its political stance from Leon Trotsky who said “fighting squads must be created” and “flabby pacifism” would not be acceptable in the struggle against fascism.

In the 1970s the Anti-Nazi League (ANL) was launched by the Socialist Workers Party and, after the socialists ejected them, Red Action was established. It is a British group that “enthusiastically espouses the use of violence.”

Although this variant ceased to exist as of 2001, it was revived as ANTIFA by the Anarchist Federation, Class War, and No Platform. ANTIFA imitated AFA’s stance of physical and ideological confrontation with patriots.

The organized left is NOT anti-globalization they work for the globalists!