GINGRICH: ESTABLISHMENT SCARED OF TRUMP BECAUSE HE “DIDN’T BELONG TO THE SECRET SOCIETY”

"He hasn't been through the initiation rites"

Former Speaker of the House Newt Gingrich told Fox News’ Bill O’Reilly last night that the establishment is scared of Donald Trump because he “didn’t belong to a secret society” and wasn’t involved in any of the rituals associated with such groups.

Discussing Mitt Romney’s anti-Trump speech yesterday, Gingrich said it represented “the panic of the establishment wing of the (Republican) Party,” and that the prospect of Trump becoming the nominee “absolutely drives them crazy”.

When asked why, Gingrich responded, “Well because he’s an outsider, he’s not them, he’s not part of the club, he’s uncontrollable, he hasn’t been through the initiation rites, he didn’t belong to the secret society.”

Gingrich is in a perfect position to know about “secret societies” given his affiliation with Bohemian Grove, an annual encampment that takes place every year in Monte Rio, California and is attended by some of the most powerful people in the world.

Gingrich’s photograph is featured in the Annals of the Bohemian Club, Volume 7, 1987-1996 alongside George W. Bush and his father. 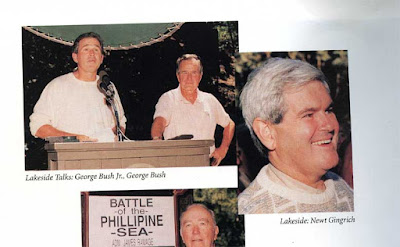