The Millennials.. The M stands for Moron!


The dumbest generation that ever existed in all of human history is upset at the Brexit vote and wants a second referendum.

Video blogger Graham Phillips interviewed young protesters who today demanded another referendum in the hope it will lead to Vote Remain winning and an end to the Brexit. 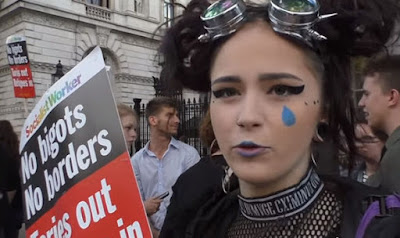 Holly, a 19-year-old cyber punk who works in Camden was taken to task by Mr Phillips.

He asked her why she wanted to remain in the EU.

She said: "It has all been about immigration, people voted out for the wrong reasons.

"I would rather stay in  - people voted just because of immigration."

Holly spoke of the "absolute devastation" of her generation, who had vented this extreme sadness on social media following the Vote Leave victory.

She was also asked for her three best things about the EU.

She strangely said the UK institution and great bastion the NHS was the best thing about the EU.

Whoever made the "Idiocracy" movie had a crystal ball!
Idiocracy - Trailer

And of course they ran to be in front of the cameras (selfie disease) before they even googled any facts! They no nothing about the EU, everything they think is wrong and making them look even dumber than they are. They must be getting their information from the BBC, which is funded by the EU. LOL At least they should be able to figure that out but that would have cut into their "mirror" time. If you haven't noticed they spend a lot of time in front of mirrors.

We are NOT having another referendum. That was agreed upon BEFORE the brexit vote something they haven't heard about yet. But then how can you hear anything when your mouth is running all the time.

We need to skip a generation. Something that is done when dire circumstances occur like this one!

Go to the third graders and tell them we're putting them in charge early and don't forget to TAKE AWAY THEIR ELECTRONICS!
Posted by JE Aggas at 2:03 PM