The United States of Europe and the Merovingian Master Plan 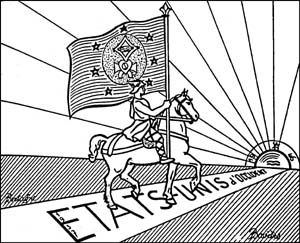 Since the time of Clovis I, the Merovingian kings of France have been the rightful heirs to the senior crown of Europe — that of the Holy Roman Empire, although that right has not always been recognized. The title that Clovis and his descendants were originally given by the Pope when the covenant between the Vatican and the Merovingians first began in 496 A.D. was “New Constantine,” giving him secular authority over the choicest bits of Christian Europe, just like the authority which the namesake of the office, Constantine, had once enjoyed. But Constantine had been the “thirteenth apostle,” and was responsible for the incorporation of Christianity into the Roman institution. He was therefore also a priest-king, holding spiritual dominion as well as secular dominion, just as previous Roman emperors had done. But when the later Merovingian kings began to exhibit a desire to exercise their own spiritual authority, which rested partially upon the foundation of their blood relationship to Jesus Christ and King David (they were the descendants of both), it sparked a chain of events that culminated in the assassination of Dagobert II, the last effective Merovingian king, and the loss of the title “New Constantine” for his descendants. However, the Merovingians appear to have taken their right to the title, and their right to European hegemony, very seriously, in a manner that seems to be rooted in something more ancient than the time of Clovis. They believe, perhaps because of their descent from Christ and King David, or perhaps because of their descent from an even more illustrious ancestor, that they were already entitled to rule over Europe long before it was sanctioned by the Pope. This “Divine Right” was recognized by their loyal subjects as well, who regarded the Merovingians as semi-divine priest-kings, and who formed a cult worshipping Dagobert II after his death. With a following like that, the Merovingians were not about to give up their rightful inheritance without a fight.

Less than 200 years later, a man named Charlemagne (Charles the Great), who married a Merovingian princess, was made Holy Roman Emperor, and given dominion over a land mass greater even than that which the Merovingians had possessed. Thus began the majestic Carolingian dynasty, consisting after Charlemagne of men with partially Merovingian blood. Charlemagne too was considered a priest-king, and is probably the most famous and beloved figure in French history. For his scepter he carried with him the Spear of Destiny, that holy relic supposedly bloodied by the wound of Christ, which is said to confer upon its possessor transcendental power over the entire Earth. And while he may not have ruled over the entire world in actuality, he did have dominion over its most significant portion. For at that time Western Europe was without a doubt the foremost bastion of culture, science, philosophy, and morality, a light in the darkness, surrounded on all fronts by uncivilized barbarian hordes.

The Carolingian dynasty ended in 918, but the Holy Roman Empire continued to play a decisive role in the unfolding of its destiny. It was during this time that the Empire began to turn its sights towards the Holy Land. The first Crusade began in 1095, and the entire enterprise was brought about because of the pressure that certain Merovingian descendants placed upon the Pope and the nobility of Europe. This resulted in the capture of Jerusalem four years later, and the creation of the Latin Kingdom of Jerusalem as part of the Holy Roman Empire. The capture was lead by Godfroi de Bouillon, a descendant of Dagobert II, and his brother, Baldwin I, was proclaimed King of Jerusalem. The Merovingian descendants appear to have considered the Holy Land their rightful possession, once again due to their direct descent from King David, and Jerusalem was in a way their coronation stone, legitimizing their eventual return to the rule of the Holy Roman Empire.

It was to this goal that they immediately dedicated themselves, and with the help of Baldwin II (son of Baldwin I, who died shortly after the capture of the Holy Land), a group of Knights was formed supposedly to help keep the roads to Jerusalem safe for pilgrims. Its core members were all from the Merovingian “Grail families,” and they soon went about establishing their own sort of empire throughout Europe — one based upon the power of money. The Templars were legally beholden to none but the Pope, and even that they took lightly, so any land controlled by them was essentially an independent principality. They held possessions throughout the continent, and controlled major industries, especially that of banking. Soon, they had all the princes of Europe indebted to them. It took the Pope and the King of France colluding against them to get them disbanded, excommunicated, and in some cases burnt at the stake before the Templar menace was finally subdued.

Meanwhile, Merovingian descendants were busy reclaiming the throne of the Holy Roman Empire via another avenue. In 1273, Count Rudolf of the Merovingian-entwined Habsburg dynasty (later Habsburg-Lorraine) was elected Holy Roman Emperor, and the title stayed within the family until the Empire itself collapsed in 1806. Interestingly, the Empire was ended by Napoleon, himself husband of a Merovingian princess who had consciously attempted to associate himself with the Merovingian mystique by placing golden bees from the tomb of Merovingian King Childeric III on his coronation robe. It is also interesting to note that, although he was not of royal blood himself, he was recognized as an emperor, and ruled over a pan-European empire much like the one that he had just crushed. The Habsburgs remained the emperors of Austria, and then Austro-Hungary, until the revolution of 1919, making them the longest reigning European dynasty in history. And their role in European politics wasn’t over by a long shot.

It took only 67 years from the end of the Holy Roman Empire for the Merovingian Grail families to begin jockeying once again for control of Europe. The Knights Templar had been the brainchild of another secret society which spawned them: the Priory of Sion, an order dedicated to nothing less than the restoration of the Merovingian bloodline to the thrones of Europe. And in 1873, they sponsored the creation of another front organization — the Hieron du Val d’Or, whose name, as the book Holy Blood, Holy Grail notes, contains an anagram of the place-name “Orval,” a location that seems to be particularly important to the Merovingians and the Priory of Sion. Notably, the word “Orval” contains the syllables which, in French, mean “gold” and “valley.” Thus “Val d’Or” means “Valley of Gold.” In his 1979 book Le Tresor du Triangle d’Or (The Treasure of the Golden Triangle), Jean-Luc Chaumeil states that the Hieron practiced a version of Scottish Rite Freemasonry, and that the upper degrees of this order constituted the lower degrees of the Priory of Sion itself. Chaumeil described the group’s disposition as “Christian, Hermetic, and aristocratic.” They proclaimed themselves to be Catholic, even though the Church of Rome condemned them. Their mystic teachings contained, according to Holy Blood, Holy Grail, “a characteristic emphasis on sacred geometry and various sacred sites… an insistence on a mystical or Gnostic truth underlying mythological motifs,” and “a preoccupation with the origins of men, races, languages, and symbols… ” The order was, “simultaneously Christian and ‘trans-Christian.’ It stressed the importance of the Sacred Heart… sought to recognize Christian and pagan mysteries… [and]… Ascribed special significance to Druidic thought — which it… regarded as partially Pythagorean.” The Hieron du Val d’Or was also unabashedly pro-monarchist, and sought a restoration of the Holy Roman Empire. But this one would be built, unlike the previous one, on an ultimately spiritual basis — a vision specifically echoed in the Priory of Sion’s own literature. The new empire would have been a reflection of Heaven on Earth, that specifically Hermetic Arcadian ideal. Jean-Luc Chaumeil described the Hieron’s agenda as:

“…a theocracy wherein nations would be no more than provinces, their leaders but proconsuls in the service of a world occult government consisting of an elite. For Europe, this regime of the Great King implied a double hegemony of the Papacy and the Empire, of the Vatican and of the Habsburgs, who would have been the Vatican’s right arm.”

The authors of Holy Blood, Holy Grail were quick to point out that this envisioned scenario accords with the Nostradamus prophecy about the “Great King” who would issue from the House of Lorraine, since the Habsburgs were the House of Lorraine. At the same time, though, this vision accords with that shared by numerous other cultures throughout the world and throughout history who have embraced the myth of the King of the World, a legendary quasi-divine global monarch who, it is said by those who believe in him, currently lives in the center of the Earth, psychically directing the affairs of mankind, and who will incarnate in human form at the end of our current epoch so that he can rule earth directly. It further accords with the “King of the blood of Sion” image discussed in the infamous The Protocols of the Wise Men of Zion, which, as Holy Blood, Holy Grail hypothesizes, may well have been the minutes of a meeting of the Priory of Sion, as it describes a plot by the descendants of King David to take over the world.