Even without winning elections, populists are setting the European Union’s agenda 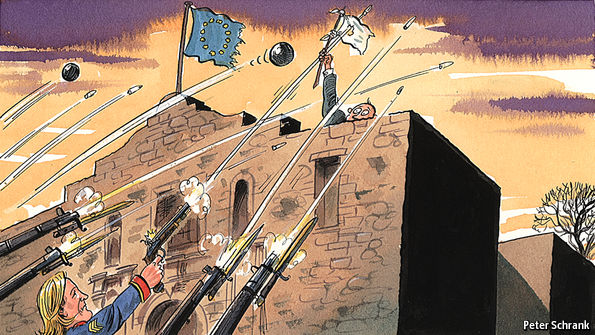 Liberals are backing protectionism and border restrictions to avoid defeat

WHERE next? After the one-two punch of Brexit and Trump, Europeans are watching every coming election, from Austria to the Netherlands to France, for fear it could become the next staging post in the long march to illiberalism. Europe’s centrists have begun to see themselves as modern-day defenders of the Alamo, desperately standing their ground as marauding populists advance on all sides. The siege of the Alamo ended when the Mexican army overran the fortress, slaughtering the doughty Texans inside. Today’s equivalent might be the elevation of Marine Le Pen, leader of France’s far-right National Front, to the Élysée in next year’s presidential election. Victory for Ms Le Pen, it is widely assumed, would herald a new age of anti-European nationalism. Quite possibly it could mean the disintegration of the European Union itself.