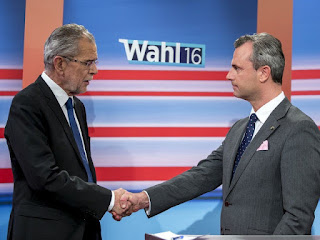 Anti-mass migration Freedom Party (FPÖ) presidential candidate Norbert Hofer sparred with the left wing former Green party leader Alexander Van der Bellen on Austrian broadcaster OE24 Thursday night. Both candidates accused each other of extremist sympathies and agreed on very little, though both agreed the victory of U.S. president elect may not have a huge influence on the result of the election reports Die Presse.

The debate, which lasted a mere half hour, saw a torrent of attacks launched by both candidates at their opponent. the moderator received questions from the audience, many of which related to the election of U.S. president-elect Donald Trump. Mr. Hofer said that he was never a cheerleader for Mr. Trump, but hoped that his new administration would look to better relations with Russia, while chastising Van der Bellen who had criticized Trump as a demagogue.

Challenges over the validity of the initial second round vote in May led to the annulment of the vote, which was pushed to October and then to December 4th after problems with the postal ballot envelopes. The polls remain close with Hofer enjoying a slight lead as many traditionally left wing working class voters have created a new voting bloc for him and the FPÖ.