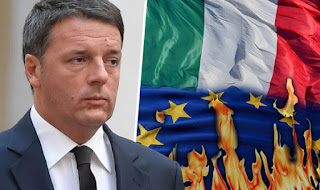 ITALY is set to deal a hammer blow to its government as the latest polls revealed voters will punish Matteo Renzi's administration in the upcoming referendum.

A Demos poll has revealed Mr Renzi's reforms will be rejected by an 11 percentage point margin in the south of the country - where most of the poorest regions are located - compared with a seven-point margin across the country.

As the nation prepares for a momentous referendum, which could spark an exit from the European Union, Mr Renzi said that he would have no interest in running the country if voters reject the proposed constitutional reform.

If the reform goes through - it will reduce the power of the senate (the equivalent of the House of Lords in the UK) and take back legal power from 20 regional governments.