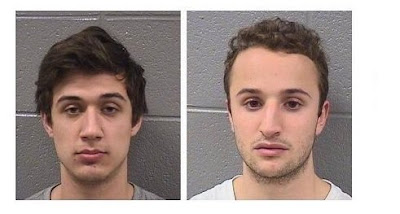 Leftist students Anthony Morales, 19 (at left), and Matthew Kafker (at right), 18, vandalized the campus church with Swastikas. They wanted it to look like Trump supporters were behind the hate crime.

Two freshmen at Northwestern University were charged with vandalizing the campus church.
The two Jewish students painted a Swastika and “Trump” on the church walls.
The Jewish Week reported:

Two Northwestern University freshmen were charged on Saturday with hate crimes and vandalism after admitting to spray-painting offensive symbols on the walls of a nondenominational campus chapel, the Chicago Tribune reported.

Anthony Morales, 19 (at left), and Matthew Kafker (at right), 18, spent Saturday in jail and court, where they were reprimanded by Cook County Judge Peggy Chiampas. “These allegations are disgusting to me,” she said during their bond hearing. “I don’t know if any of you know how lucky you are to be at Northwestern University.”

Police said the students were filmed by security cameras breaking into the chapel on Friday night. The next day after which they appear to have spray-painted swastikas, pictures of genitals, racist slurs against African Americans and Muslims, homophobic slurs, and the word “Trump,” according to the Tribune.