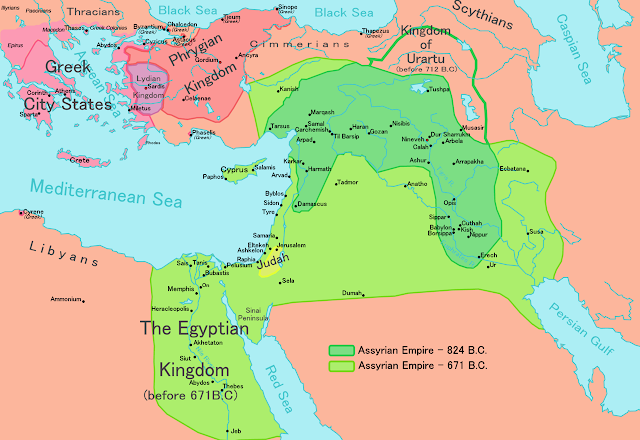 Map of the Neo-Assyrian Empire and its expansions – dark green shows the empire in 824 BCE, light green in 671 BCE.


The Neo-Assyrian Empire was an Iron Age Mesopotamian empire, in existence between 911 and 612 BC. The Assyrians perfected early techniques of imperial rule, many of which became standard in later empires.

Following the conquests of Adad-nirari II in the late 10th century BC, Assyria emerged as the most powerful state in the known world at the time, coming to dominate the Ancient Near East, East Mediterranean, Asia Minor, Caucasus, and parts of the Arabian Peninsula and North Africa, eclipsing and conquering rivals such as Babylonia, Elam, Persia, Urartu, Lydia, the Medes, Phrygians, Cimmerians, Israel, Judah, Phoenicia, Chaldea, Canaan, the Kushite Empire, the Arabs, and Egypt.

Upon the death of Ashurbanipal in 627 BC, the empire began to disintegrate due to a brutal and unremitting series of civil wars in Assyria proper. In 616 BC, Cyaxares king of the Medes and Persians made alliances with Nabopolassar ruler of the Babylonians and Chaldeans, and also the Scythians and Cimmerians against Assyria. At the Fall of Harran (609 BC) the Babylonians and Medes defeated an Assyrian-Egyptian alliance, after which Assyria largely ceased to exist as an independent state, although the Assyrian army and remnants of its administration continued to hold out around Carchemish until 605 BC, and around Dur-Katlimmu until perhaps as late as 599 BC.

Adad-nirari II (reigned from 911 to 891 BC) is generally considered to be the first King of Assyria in the Neo-Assyrian period. 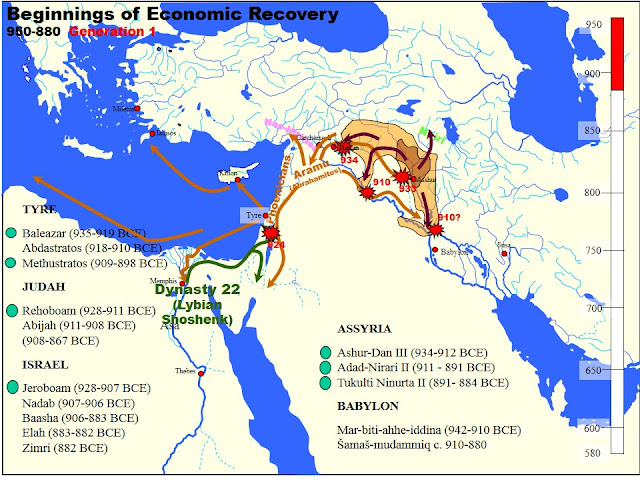 Economic recovery in the reign of Adad-nirari II