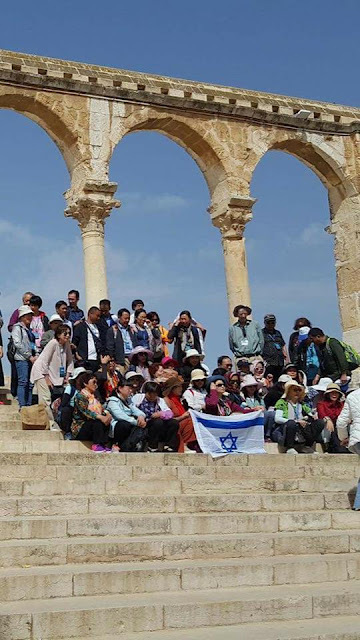 The last time the Israeli flag flew on the Temple Mount was for a very brief time after the IDF conquered the site in the 1967 Six Day War, but on Wednesday, a group of Chinese Christian tourists posed with a flag on the steps leading up to the Dome of the Rock. 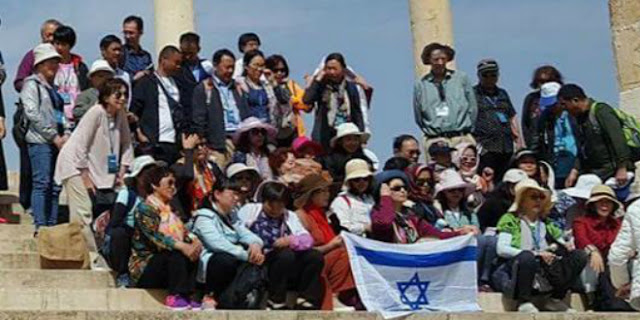 On Wednesday 4/11/2018, Stand With Us, a non-profit pro-Israel education and advocacy organization based in Los Angeles posted the photo on their Facebook page, saying:


The Six-Day War: The Liberation of the Temple Mount and Western Wall

The Temple Mount (Hebrew: הַר הַבַּיִת‎, Har HaBáyit, "Mount of the House [of God, i.e. the Temple]"), known to Muslims as the Haram esh-Sharif (Arabic: الحرم الشريف‎, al-Ḥaram al-Šarīf, "the Noble Sanctuary", or الحرم القدسي الشريف, al-Ḥaram al-Qudsī al-Šarīf, "the Noble Sanctuary of Jerusalem") is a hill located in the Old City of Jerusalem that for thousands of years has been venerated as a holy site, in Judaism, Christianity, and Islam alike. The present site is dominated by three monumental structures from the early Umayyad period: the al-Aqsa Mosque, the Dome of the Rock and the Dome of the Chain, as well as four minarets. Herodian walls and gates with additions dating back to the late Byzantine and early Islamic periods cut through the flanks of the Mount. Currently it can be reached through eleven gates, ten reserved for Muslims and one for non-Muslims, with guard posts of Israeli police in the vicinity of each.

According to the Bible, the Jewish Temples stood on the Temple Mount. According to Jewish tradition and scripture, the First Temple was built by King Solomon the son of King David in 957 BCE and destroyed by the Babylonians in 586 BCE. The second was constructed under the auspices of Zerubbabel in 516 BCE and destroyed by the Roman Empire in 70 CE. Jewish tradition maintains it is here that a third and final Temple will also be built. The location is the holiest site in Judaism and is the place Jews turn towards during prayer. Due to its extreme sanctity, many Jews will not walk on the Mount itself, to avoid unintentionally entering the area where the Holy of Holies stood, since according to Rabbinical law, some aspect of the divine presence is still present at the site.

Jewish connection and veneration to the site arguably stems from the fact that it contains the Foundation Stone which, according to the rabbis of the Talmud, was the spot from where the world was created and expanded into its current form. It was subsequently the Holy of Holies of the Temple, the Most Holy Place in Judaism. Jewish tradition names it as the location for a number of important events which occurred in the Bible, including the Binding of Isaac, Jacob's dream, and the prayer of Isaac and Rebekah.

Similarly, when the Bible recounts that King David purchased a threshing floor owned by Araunah the Jebusite, tradition locates it as being on this mount. An early Jewish text, the Genesis Rabba, states that this site is one of three about which the nations of the world cannot taunt Israel and say "you have stolen them," since it was purchased "for its full price" by David. According to the Bible, David wanted to construct a sanctuary there, but this was left to his son Solomon, who completed the task in c. 950 BCE with the construction of the First Temple.