The Southern Poverty Law Center has a Twitter account that informs SJW’s (because those are the only people who care) what right-wingers are talking about. They claim that every right-winger is evil and that everything they tweet about is hate speech. Those would include trending topics like #dogs and #fun. I guess it’s hateful to have fun and play fetch with your dogs? These are strange times we live in. 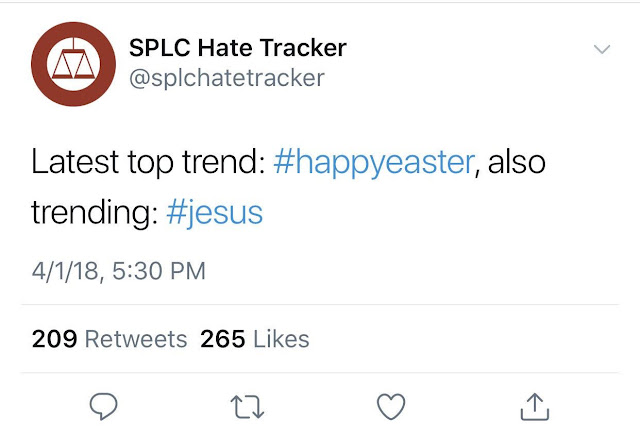 Speaking of strange, two other trending topics came across as hate speech to the Southern Poverty Law Center yesterday, those topics were #Jesus and #HappyEaster.

Understandably, most people were both angered and confused by what SPLC deemed as hate speech. Here are a few of the replies.

“The SPLC hate tracker is tracking “happy easter” and “Jesus”. Beware of when you mention Jesus in your Tweets. One day they will launch drone strikes on Christians too!” #DroneMeForJesus

“I’ll beware of nothing! Jesus/Yeshua came to teach us love, kindness, and forgiveness, and we killed him for it. Sad. Just like they are trying to kill that message today.”

“Didn’t Google hire SPLC to monitor YouTube? This is obviously singling out a specific faith group… There is no doubt that the Left in power would be a fascist state, that would seek to silence and destroy Christian people.”

The previous day, hashtags like “blessings” “goodfriday” and “Saturday Morning” were trending and labeled as hate speech. At first, it would be reasonable to believe that this account is a joke, but with them also promoting #MAGA, #Istandwithlauraingrahm, and #hoggroast as hate speech, it’s highly unlikely that the account is a prank or a parody. It’s just a bunch of liberals getting together to force feed people their flawed logic.

Jesus has always stood for love and redemption, not hate. It sounds as if organizations like The Southern Poverty Law Center hate Christianity in general, and thus proving their hypocrisy. They claim to love and tolerate anyone, but if you claim to be a Christian, you’re suddenly the equivalent of a Nazi to them. This has to stop.