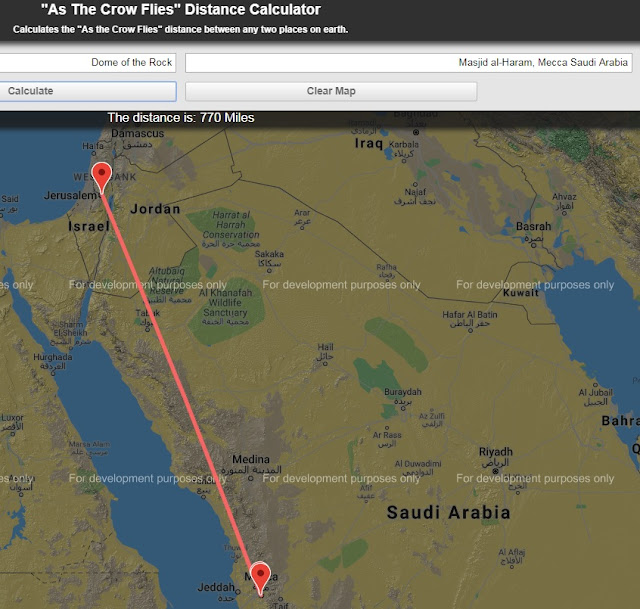 THERE ARE 770 MILES BETWEEN THE GREAT MOSQUE OF MECCA & THE DOME OF THE ROCK JERUSALEM!


Chabad-Lubavitch is the global Jewish organization pushing to rebuild the third temple.

The headquarters of Chabad-Lubavitch  is called 770 for the address 770 Eastern Parkway Brooklyn NY
. The thing that's shocking about having that number for an address is that the number of miles between the mosque in Jerusalem and the Great mosque in Mecca is 770 miles.

770 Eastern Parkway (Yiddish: 770 איסטערן פארקוויי‎), also known as "770", is the street address of the central headquarters of the Chabad-Lubavitch Hasidic movement, located on Eastern Parkway in the Crown Heights section of Brooklyn, New York, in the United States.

Rabbi Menachem Mendel Schneerson described[9] 770 as "Beis Rabbenu ShebeBovel" ("house of our teacher in Babylon"), "And we may explain, according to the above, that as regards 'our teacher's house in Babylonian' in this generation-it means the home and synagogue of my holy father-in-law, the leader of our generation... 'Our teacher's house' is the primary 'little Temple' in this last exile ... which is the place of the future Temple itself, and not only that, but there will be revealed the future Bais Hamikdash, and from there it will go to Jerusalem. This idea is suggested in the name of 'our teacher's house' in our generation: ... it is universally referred to by its number, 770, which has the same gematria as paratzta (you will spread out)."

Zalman Jaffe was a lay leader in Manchester, England and had a very close relationship with the Lubavitcher Rebbe, in his book "My Encounter with the Rebbe", he relates that, "I found a Tehillim in 770 which, on the front piece, was inscribed, 'The gematria of Beis Moshiach (the house of Moshiach) is 770.' I showed it to the Rebbe who laughed heartily." Later the Rebbe himself pointed out this gematria in a footnote in the famous "Kuntres B'inyan Mikdash Ma'at" 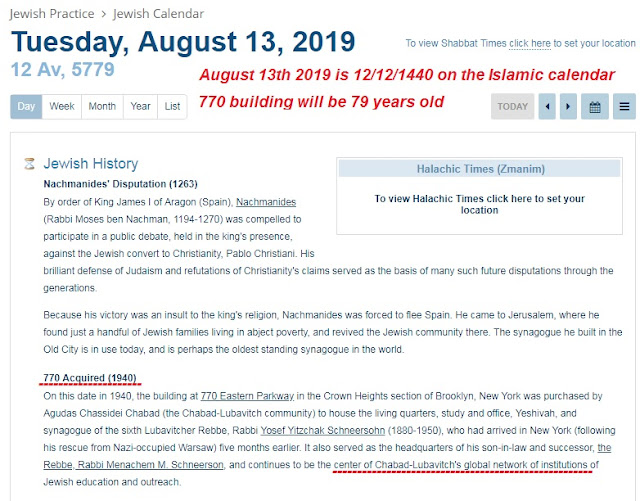 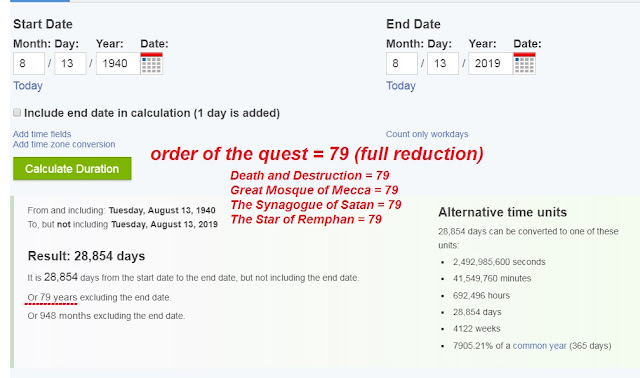 They build replicas of 770 all over the world.

Why? because there are 770 miles from the Grand Mosque in Mecca to the Temple Mount where the two mosques sit that they have to take down before they can build the 3rd temple. The Grand mosque is in charge of the Temple mount mosques therein lies the conflict. The 770 conflict.....

And you should recognize this number
"770 Eastern Pkwy, Brooklyn, NY" = 322 (English Ordinal)