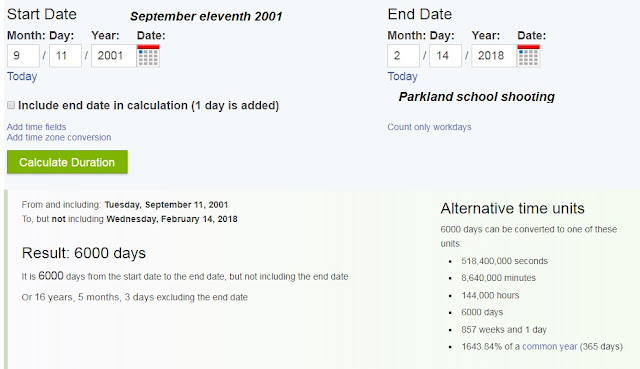 So if you think about Parkland and 9/11 on a longer time frame, Parkland shooting happened 6 days after Tisha B'Av on Valentines Day...

Tu B'Av (Hebrew: ט"וּ באב‎, lit. 'fifteenth of Av') is a minor Jewish holiday. In modern-day Israel, it is celebrated as a holiday of love (חג האהבה‎ Hag HaAhava), similar to Valentine's Day. It has been said to be a "great day for weddings".

According to the Mishna, Tu B'Av was a joyous holiday in the days of the Temple in Jerusalem, marking the beginning of the grape harvest. Yom Kippur marked the end of the grape harvest. On both dates the unmarried girls of Jerusalem dressed in white garments, and went out to dance in the vineyards (Babylonian Talmud, tractate Ta'anit 30b–31a).That same section in the Talmud states that there were no holy days as happy for the Jews as Tu B'Av and Yom Kippur.The holiday celebrated the wood-offering brought in the Temple (see Nehemiah 13:31). Josephus refers to it as the Feast of Xylophory ("Wood-bearing").

Various reasons for celebrating on Tu B'Av are cited by the Talmud and Talmudic commentators:

While the Jews wandered in the desert for forty years, female orphans without brothers could only marry within their tribe to prevent their father's inherited territory in the Land of Israel from passing on to other tribes. On the fifteenth of Av, this ban was lifted and inter-tribal marriage was allowed (see Daughters of Zelophehad).

That same year, the last of the generation of the sin of the spies, which had been forbidden to enter the Promised Land, found that they were not destined to die. For forty years, every Tisha B'av night, the Jews made graves for themselves in which they slept on Tisha B'Av; every year a proportion of them died. In the 40th year, the fifteen thousand who had remained from the first generation went to sleep in the graves and woke up the next day to their surprise. Thinking they made a mistake with the date, they did this until they reached Tu B'Av and saw a full moon. Only then did they know they were going to enter the Land of Israel with the new generation.

The Tribe of Benjamin was allowed to intermarry with the other tribes after the incident of the Concubine of Gibeah (see Judges chapters 19–21).

Cutting of the wood for the main altar in the Temple was completed for the year.

King Hoshea of the northern kingdom removed the sentries on the road leading to Jerusalem, allowing the ten tribes to once again have access to the Temple.

The nights, traditionally the ideal time for Torah study, are lengthened again after the summer solstice, permitting more study.

The Roman occupiers permitted burial of the victims of the massacre at Bethar during the Bar Kochba rebellion. Miraculously, the bodies had not decomposed, despite exposure to the elements for over a year.

Tu B'Av marks an informal "high" to counter the "low" of The Three Weeks leading up to Tisha B'Av. Tu B'Av does not have many established religious rituals associated with its celebration. However Tachanun is not said—either at mincha the day before or on the day itself—and a bride and groom traditionally do not fast if their wedding falls on Tu B'Av.

In modern times, it has become a romantic Jewish holiday, often compared to Valentine's Day, and has been said to be a "great day for weddings, commitment ceremonies, renewal of vows, or proposing". Also, "It is a day for romance, explored through singing, dancing, giving flowers, and studying.