Damn I was going to flag a 48 hour period for a mass shooting yesterday but I got sidetracked with Jeff Sessions! I would be a genius today!

Yesterday it was 545 days 5/11/2017 since the NYT wrote an open letter to Rosenstein asking him to save the country on  from Trump and six days or 144 hours later he hired Mueller and created the special counsel on 5/17/2017  Rosenstein was removed from the specail counsel yesterday 545 days later.

So we have the eclipse and the new moon events connected...

It's right by Simi Valley to were all the cops that beat Rodney King lived. It's also next to Calabrass where all the movie stars live... Hollywood actors and freemason cops living next door to each other. lol

They sure have a lot of events avertized. I wonder if they're using that as a calendar. 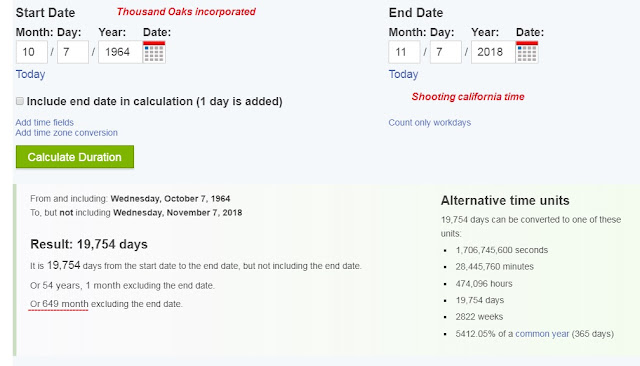 Crime rate in Ventura county is 33% lower that the rest of CA .... LOL

Considering huge amount of devil worshipers in Ventura Country I'm going to lean toward a Jack Parsons tribute sacrifice. It's too perfect fitting his name and birth date. 888 hours or 37 days after his birthdate. 888  Trump  37 Jack Parsons.  The demon people love Parsons he's practically a Saint.  You got JPL a few miles away, you got Hollywood in Calabis.  You got Palomar Telescope  associated with JPL sitting on the 33 parellel with all kinds of rumors of devil worshiping coming out of there. And I know people dismiss this Satanist angel but they really did take over the state in the 60s. The militarys involved too so I wouldn't doubt at all that the shooter was a devil worshiper doing his duty for his comrades.  Ventura County is also were porn films get produced. Snuff films too. Bad shit goes on there for real.  So I think Jack Parsons tribute and gun control push  by the demon people to send a message to the Dems they own. "You have the House push gun control"

And all these CIA/military intelligence headquarters all all in this same area. Here's Laurel Canyon where the hippie movement was created by the CIA in the same area...
Laurel Canyon, Los Angeles  same co-ordinates
34° 7′ 2.19″ N, 118° 22′ 31.01″ W