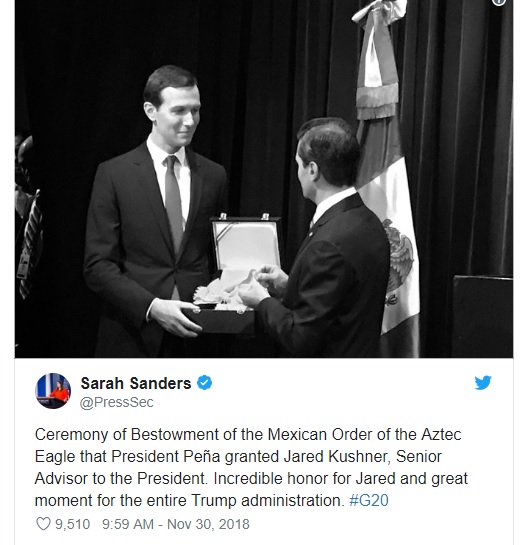 Jared was down there signing the new NAFTA agreement. That FTA was Poppy Bushes baby...

The Order of the Aztec Eagle (Spanish: Orden Mexicana del Águila Azteca) forms part of the Mexican Honours System and is the highest Mexican order awarded to foreigners in the country.

It was created by decree on December 29, 1933 by President Abelardo L. Rodríguez as a reward to the services given to Mexico or humankind by foreigners. It corresponds to similar distinctions given to Mexican citizens such as the Condecoración Miguel Hidalgo or the Belisario Domínguez Medal of Honor. It is given by the office of the foreign minister on the instructions of a Council established for this purpose headed by the President.

Jared Kushner, President Trump's son-in-law and senior adviser, was awarded the "Order of the Aztec Eagle" by Mexican President Enrique Peña Nieto on Friday, hours after Mr. Trump and Peña Nieto signed the U.S.-Mexico-Canada Trade Agreement. The ceremony took place in Argentina, where world leaders are gathered for the G20 summit.

Kushner received the "Aztec Eagle" for his work developing the trade deal between the U.S., Mexico and Canada, which was negotiated to replace the North American Free Trade Agreement. The Mexican government's press release on the honor praised Kushner in Spanish, saying that "Mr. Kushner's participation was a determining factor in starting the NAFTA renegotiation process and avoiding a unilateral exit by the United States from that treaty." Mr. Trump had repeatedly threatened to leave NAFTA before the USMCA was negotiated. 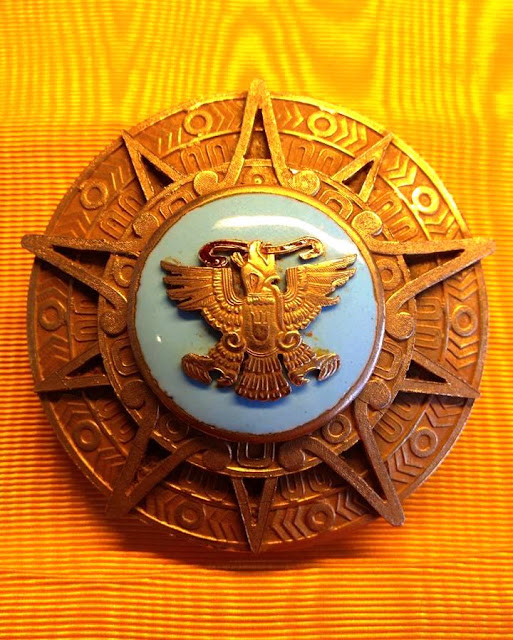