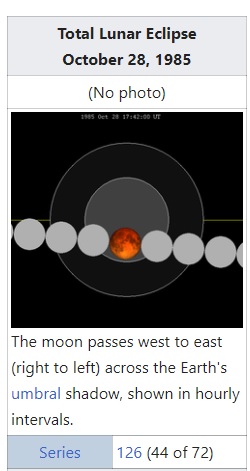 Could you, when you have a moment to do a search for correspondences and synchronicities in gematria with the date of the following Gregorian calendar: Thursday, October 24, 1985. I know that the Gregorian calendar of 1985 and 2019 have the same dates, for example on Thursday, October 24, 2019. I also know that between October 28, 1985 and October 29, 1985 there was a total lunar eclipse quite special because "Lunar Saros series 126, repeating every 18 years and 11 days, has a total of 70 lunar eclipse events including 14 total lunar eclipses. Solar Saros 133 interleaves with this lunar saros with an event occurring every 9 years 5 days alternating between each saros series." and "This eclipse is the second of four Metonic cycle lunar eclipses on the same date, October 28–29, each separated by 19 years: The Metonic cycle repeats nearly exactly every 19 years and represents a Saros cycle plus one lunar year. Because it occurs on the same calendar date, the earth's shadow will in nearly the same location relative to the background stars." 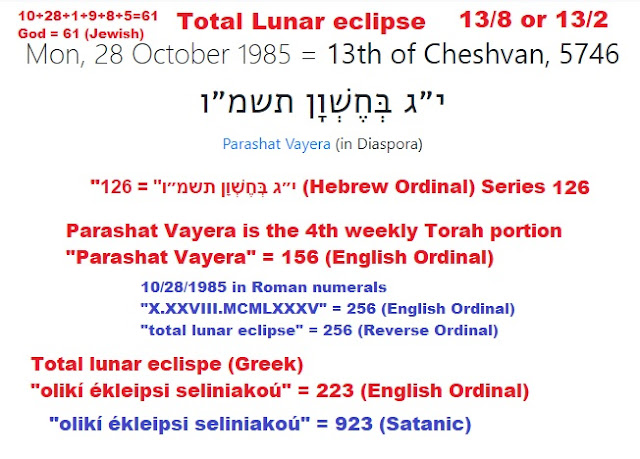 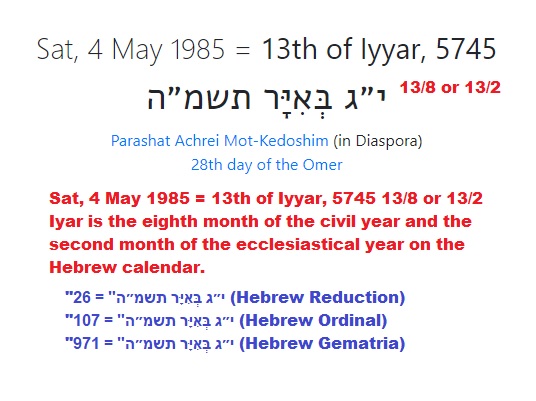 Something very interesting about the two total lunar eclipses of 1985. The date numbers mirrored each other on the Jewish calendar...

Mon, 28 October 1985 = 13th of Cheshvan, 5746 13/2 or 13/8
Marcheshvan, sometimes shortened to Cheshvan, is the second month of the civil year, and the eighth month of the ecclesiastical year on the Hebrew calendar.