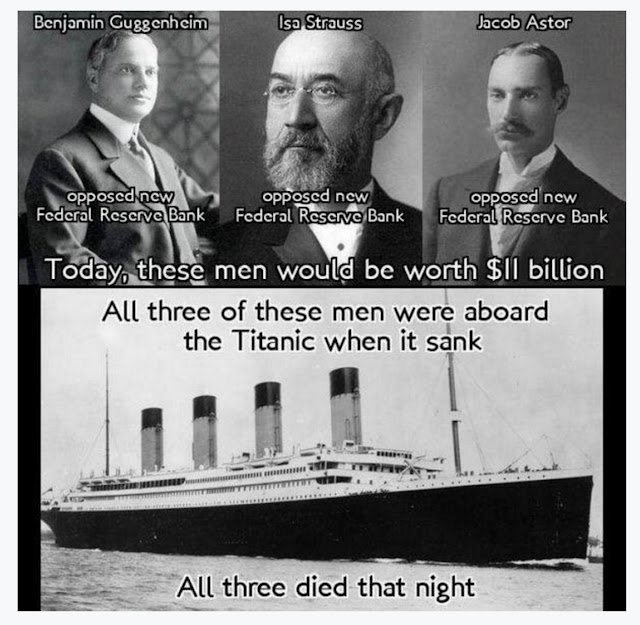 Benjamin Guggenheim (October 26, 1865 – April 15, 1912) was an American businessman. He died aboard RMS Titanic when the ship sank in the North Atlantic Ocean. His body was never recovered.

Benjamin Guggenheim was born in Philadelphia, Pennsylvania, US, the fifth of seven sons of the wealthy mining magnate Meyer Guggenheim (1828–1905) and Barbara Myers (1834–1900), both originally from Lengnau, Aargau, Switzerland.[2][3] He attended the Peirce School of Business (now Peirce College), then one of the most prominent business schools in the country. Guggenheim was Jewish.[4] In 1894, he married Florette Seligman (1870–1937),[5] daughter of James Seligman, a senior partner in the firm J. & W. Seligman & Co. and Rosa Seligman née Content. Together, they had three daughters: Benita Rosalind Guggenheim (1895–1927), Marguerite "Peggy" Guggenheim (1898–1979) and Barbara Hazel Guggenheim (1903–1995).

Guggenheim inherited a great deal of money from his father. Due to business concerns, he grew distant from his wife and was frequently away from their New York City home. He maintained an apartment in Paris, France


Isidor Straus (February 6, 1845 – April 15, 1912) was a German-born American Jewish businessman, politician and co-owner of Macy's department store with his brother Nathan. He also served for just over a year as a member of the United States House of Representatives.[2] He died with his wife, Ida, in the sinking of the passenger ship RMS Titanic.

Astor died in the sinking of RMS Titanic during the early hours of April 15, 1912.[2] Astor was the richest passenger aboard the RMS Titanic and was thought to be among the richest people in the world at that time with a net worth of nearly $87 million when he died (equivalent to $2.26 billion in 2018).

John Jacob Astor IV was born on July 13, 1864, at his parents' country estate of Ferncliff in Rhinebeck, New York. He was the youngest of five children and only son of businessman, collector, and racehorse breeder/owner William Backhouse Astor, Jr. and socialite Caroline Webster "Lina" Schermerhorn. His four elder sisters were Emily, Helen, Charlotte, and Caroline ("Carrie").

He was a great-grandson of fur-trader John Jacob Astor and Sarah Cox Todd, whose fortune made the Astor family one of the wealthiest in the United States. Astor's paternal grandfather William Backhouse Astor, Sr. was a prominent real estate businessman. Through his paternal grandmother, Margaret Alida Rebecca Armstrong, Astor was also a great-grandson of Senator John Armstrong, Jr. and Alida Livingston of the Livingston family. His maternal grandparents were Abraham Schermerhorn, a wealthy merchant, and socialite Helen Van Courtlandt White. He was also a nephew of financier and philanthropist John Jacob Astor III, and grandnephew of occasional poet John Jacob Astor, Jr. His sister Helen's husband was diplomat James Roosevelt "Rosey" Roosevelt, half-brother of President Franklin Delano Roosevelt of the Roosevelt family. Another sister, Carrie, a noted philanthropist, was the wife of Marshall Orme Wilson (brother of banker Richard Thornton Wilson, Jr. and socialite Grace (née Wilson) Vanderbilt). Astor was also a first cousin of William Waldorf Astor, 1st Viscount Astor, with whom his mother had a notorious feud resulting in William's removal to England.

Astor attended St Paul's School in Concord, New Hampshire, and later attended Harvard College.[4] Astor went by the name "Jack". His ungainly appearance and the perception that he was an aimless dilettante led one newspaper to give him the name "Jack Ass-tor"