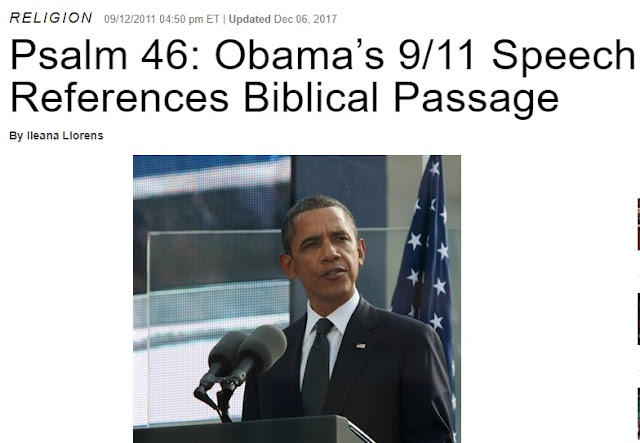 Psalm 46 is the 46th psalm of the Book of Psalms, known in English by its beginning, "God is our refuge and strength, a very present help in trouble" in the King James Version. In the Greek Septuagint version of the Bible, and in its Latin translation in the Vulgate, this psalm is Psalm 45 in a slightly different numbering system. In Latin, it is known as "Deus noster refugium et virtus". The song is credited to the sons of Korah.

The psalm is a regular part of Jewish, Catholic, Anglican and Protestant liturgies. According to Spurgeon, Psalm 46 is called a "song of holy confidence"; it is also known as "Luther's Psalm", as Martin Luther wrote his popular hymn "Ein feste Burg ist unser Gott" ("A Mighty Fortress Is Our God") as a paraphrase of Psalm 46. Luther's hymn has been quoted in many musical works, both religious and secular, including Bach's cantata Ein feste Burg ist unser Gott, BWV 80. Johann Pachelbel set the psalm in German and Jean Philippe Rameau in Latin, among many others.

According to Henry, this psalm may have been composed after David defeated the enemies of ancient Israel from surrounding lands. Spurgeon notes that the description in verse 1 in the Hebrew Bible version, calling for the psalm to be played "on alamot", could denote either a high-pitched musical instrument or the soprano voices of young girls who went out to dance in celebration of David's victory over the Philistines. The Midrash Tehillim, however, parses the word alamot (Hebrew: עלמות‎) as referring to the "hidden things" that God does for his people. The psalm praises God for being a source of power and salvation in times of trouble. The reference to "morning" in verse 5 alludes to Abraham, who would rise at daybreak to pray to God.

There is a difference of opinion among Christian scholars as to which "river" the psalm is referring to in verse 4 of the KJV, the streams of which make glad the city of God. Among the possibilities are:

The Jordan River. However, the Jordan River is a distance of 20 miles (32 km) northeast of Jerusalem (assuming that the "city of God" is a reference to Jerusalem). For this reason, some have found this possibility unlikely.
A river in Jerusalem during the millennial reign of Christ. This river will run from beneath the Temple in Jerusalem eastward to the Dead Sea, as described in the forty-seventh chapter of the Book of Ezekiel.
A river in Jerusalem after the millennial reign of Christ. This is the river that flows from the New Jerusalem, as described in the twenty-second chapter of the New Testament Book of Revelation.
It has been proposed that this psalm is prophesying a time when, according to Christian Scripture, Jesus Christ returns to rule the world from Jerusalem for 1,000 years

In Judaism
Portions of the psalm are used or referenced in several Jewish prayers. Verse 2 is part of Selichot. Verse 8 is said in the daily morning service during the recitation of the incense offering, in Pesukei Dezimra, and in Uva Letzion; it is said in Uva Letzion in the Shabbat morning service, Yom Tov afternoon service, and Motza'ei Shabbat evening service as well. Verse 12 is part of the Havdalah ceremony. Yemenite Jews include it as part of Yehi kevod.

In the Siddur Avodas Yisroel, Psalm 46 is the psalm of the day for Shabbat Va'eira.

The psalm is recited as a prayer for the end of all wars.

Catholic Church
This psalm was traditionally recited or sung at the office of matins on Tuesday after St. Benedict of Nursia established his rule of St. Benedict around 530, mainly in the numerical order of the psalms. Today, Psalm 46 is sung or recited at Vespers on Friday of the first week.

Politics
U.S. President Barack Obama referenced the psalm in several speeches, most notably the Tucson memorial speech and his speech on the 10th anniversary of the September 11 attacks in New York City.

Shakespeare's alleged involvement
For several decades, some theorists have suggested that William Shakespeare placed his mark on the translated text of Psalm 46 that appears in the King James Bible, although many scholars view this as unlikely, stating that the translations were probably agreed upon by a committee of scholars.

On the other hand, Shakespeare was in King James' service during the preparation of the King James Bible, and was generally considered to be 46 years old in 1611 when the translation was completed. There are a few extant examples of Shakespeare's actual signature, and as was customary at the time, with spelling being somewhat lax in those pre-standardized days, on at least one occasion he signed it 'Shakspeare', which divides into four and six letters, thus '46'. The 46th word from the beginning of Psalm 46 is "shake" and the 46th word from the end (omitting the liturgical mark "Selah") is "spear" ("speare" in the original spelling)

Thousands of viewers cast their eyes on televisions Sunday as they watched the 9/11 memorial services held in New York, Pennsylvania and Virginia.

President Barack Obama made an appearance at each service, but it was the citation of Psalm 46 during his speech in New York City that seemed to make an impression upon audiences everywhere.

Shortly after the President observed a moment of silence for the first plane to strike the World Trade Center, he read the biblical passage that began, “God is our refuge and strength, a very present help in trouble.”

Yahoo! News describes the passage as “a sure defense in desperate times.” But some questioned the President’s use of scripture at all.

In a statement released by the White House, Principal Deputy Press Secretary Josh Earnest explained the decision to use Psalm 46:

The President chose a scripture which he believed was most appropriate — he believed it was particularly appropriate to use — to read scripture this morning. And he chose a passage that talks of persevering through very difficult challenges and emerging from those challenges stronger.

“Ten years ago America confronted one of our darkest nights,” Obama said during a speech at the Kennedy Center in Washington Sunday evening.

“These past 10 years have shown that America does not give in to fear,” he adds later.

German scholar Hermann Gunkel has interpreted Psalm 46, and his writings were published in “The Biblical World”. He writes:

Terrible troubles — says the old prophecy — shall come over the earth in the last days; there shall be dreadful throes to usher in the new age, and earthquake which shall destroy the very foundations of earth. The highest things shall be thrown down, the mountains shall tumble into the sea. But in all these catastrophes and convulsions which come upon the universe we are to have no fear.

This isn’t the first time the scripture has been used in a tribute, Yahoo! News reports. Obama referenced Psalm 46 during a speech about the Tuscon shooting that injured Congresswoman Gabrielle Giffords and killed 9/11 child Christina Taylor Green and 19 others.

For the complete Psalm 46 passage, view the video below, or read it on The White House blog.
https://www.huffpost.com/entry/psalm-46-obamas-911-speech_n_958954