There were no such patrols sent to Christian churches after the New Zealand shooting. Portland city leadership, including police chief Danielle Outlaw, instead met with local muslim leaders. As expected, extra patrols were dispatched to protect islamic centers, out of “an abundance of caution.” What’s more, Portland police has an entire committee dedicated to pandering to muslims, called the Muslim Advisory Council.

There have been no extra patrols out protecting “Easter Worshippers” after the Sri Lanka church bombings. Or the Nigerian Christian slayings. Or the Filipino Christian slaughter. There’s no “abundance of caution” there.

In a twist of irony, the city of Portland pulled out of the FBI’s Joint Terrorism Task Force earlier this year over fears that muslims would be targeted. Now that same task force is the one that’s investigating possible threats against muslims.

This is also in light of the likely hoax reports being made around Portland, where paranoid social justice wackjobs are making up new stories every week about how nazi white supremacists are lurking around every corner and assaulting transgender and black folks. 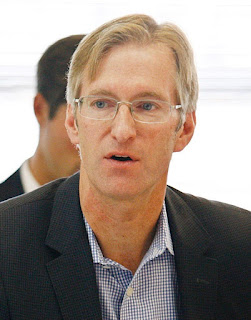 Edward Tevis Wheeler (born August 31, 1962) is an American politician who has served as the mayor of Portland, Oregon, since 2017. He previously served as Oregon State Treasurer.

Wheeler was appointed Treasurer on March 9, 2010, to replace Ben Westlund, who died in office, and was subsequently elected to a full term in 2012. He is a member of the Democratic Party.[1]

During his first State of the City speech, Wheeler said he was focused on "helping to create a clear direction for the future of our community,"[4] and during an interview summing up his first six months in office, Wheeler said, "I see myself very much as a transitional mayor" because he has been primarily been dealing with issues relating to population growth

His birthday falls on the last day of the Islamic year 1440.