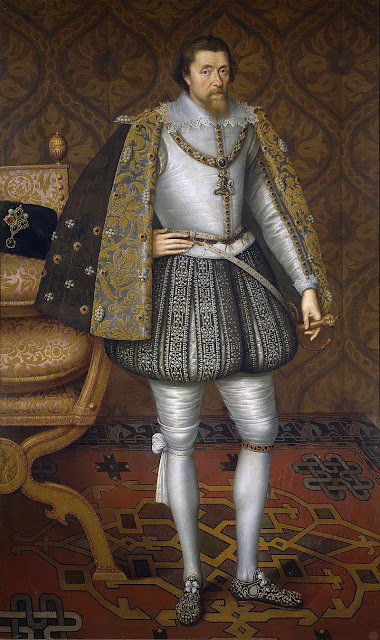 James VI and I (James Charles Stuart; 19 June 1566 – 27 March 1625) was King of Scotland as James VI from 24 July 1567 and King of England and Ireland as James I from the union of the Scottish and English crowns on 24 March 1603 until his death in 1625. The kingdoms of Scotland and England were individual sovereign states, with their own parliaments, judiciaries, and laws, though both were ruled by James in personal union.

James was the son of Mary, Queen of Scots, and a great-great-grandson of Henry VII, King of England and Lord of Ireland, positioning him to eventually accede to all three thrones. James succeeded to the Scottish throne at the age of thirteen months, after his mother was compelled to abdicate in his favour. Four different regents governed during his minority, which ended officially in 1578, though he did not gain full control of his government until 1583. In 1603, he succeeded the last Tudor monarch of England and Ireland, Elizabeth I, who died without issue. He continued to reign in all three kingdoms for 22 years, a period known after him as the Jacobean era, until his death in 1625 at the age of 58. After the Union of the Crowns, he based himself in England (the largest of the three realms) from 1603, only returning to Scotland once in 1617, and styled himself "King of Great Britain and Ireland"

"Revelation chapter thirteen verse eighteen" = 619 (Reverse Francis Bacon)
Here is wisdom. Let him that hath understanding count the number of the beast: for it is the number of a man; and his number is Six hundred threescore and six.
"mystery Babylon" = 196 (English Ordinal)