It is because of this prophecy that we have always anticipated that 6 million of our people would perish prior to our being allowed to return to Israel, as can be seen in the numerous references to "six million Jews" made by many of our rabbis and scholars who saw the Shoah coming decades before the prophecy of our return to Israel was fulfilled. As far back as 1900, Rabbi Stephen S. Wise, who was the major leadership figure of the American Jewish Congress during its formative period, spoke of the "6,000,000 living, bleeding, suffering, arguments in favor of Zionism" when he addressed an audience who had come to hear him speak as reported in the New York Times on June 11, 1900. 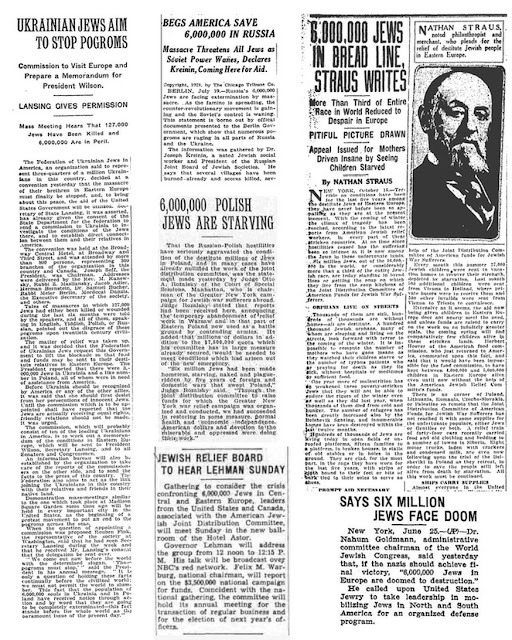 In the Torah it is written: "It shall be a jubilee unto you; and you shall return every man to his possession and you shall return every man to his family." In the Torah, the word for תשבה, teshuva, "return" is missing the letter ו (vav), ordinarily it would be spelled  תשובה. The Zohar tells us that the Torah writes teshuva without the letter vav to hint at the year when the Jewish people will return to our land from the long and bitter exile.

Therefore the missing vav  in the word תשבה, as written in the Torah (which equals the number 6) was a prophecy that the Jews would be allowed to return to Israel minus 6 million of our people: “You shall return minus 6 million"; while the combined numerical value of the word teshuva = 708, indicates the year of our return

When we write the year, we ignore the millennia. In 1948 on the secular calendar, we witnessed the miracle of the return of the Jewish people to Israel, which occurred in the year 5708 of the Hebrew calendar, the year predicted by the incomplete word teshuva as written in the Torah. We did return, less the missing 6; that is the 6 million of our people who perished in the holocaust. Yet the fulfillment of the prophecy of our return in precisely the year predicted, as implied by the gematria of the word teshuva, gives us hope that the words of the prophets for Final Redemption will come true as well.

The Jewish-American Year Book for 5672 AM (1912 CE) reported that "Russia has since 1890 adopted a deliberate plan to expel or exterminate six millions of its people for no other reason than that they refuse to become members of the Greek Church, but prefer to remain Jews."

On November 11th, 1919, newspapers across America published details of Herbert Hoover's visit to Eastern Europe in order to assess the conditions following the First World War as head of the International Relief Organization, saying: "The territory which Mr. Hoover visited is but a small part of that in which 6,000,000 Jews, sufferers of war and war's equally horrible aftermath, stand helpless today, hopeless too, save for the promise of aid from America."

Throughout the decades leading up to World War II, newspapers around the world published countless articles in which members of the Jewish community made clear and precise references to the predicted number of six million Jews whose fate was foretold by the prophecy revealed by the missing letter vav in the word teshuva as spelled in the Torah:

In the Torah, the word for תשבה, teshuva, "return" is missing the letter ו (vav), ordinarily it would be spelled  תשובה. The Zohar tells us that the Torah writes teshuva without the letter vav to hint at the year when the Jewish people will return to our land from the long and bitter exile.