All year long, Marjory Stoneman Douglas High School teacher Ivy Schamis teaches her students about the Holocaust: about perpetrators, victims and survivors both historical and contemporary.

The student activists forged in the crucible of the shooting have drawn on the lessons she taught in her classroom, decorated with barbed-wire painted on the walls, Never Forget posters and an “Arbeit Macht Frei” sign over her desk. She will never be allowed to go back there; the building is going to be destroyed. But she continues to teach, and they continue to learn. Life is just very different.

It’s no coincidence that in the harrowing, sleepless days following the shooting, the students adopted #NeverAgain - and #NeverAgainMSD as a calling card for their nascent movement. It was the students’ idea entirely, but the experience of being in the class clearly left an imprint - and perhaps helped fire up their urge to speak out.

These are the things that Ivy Schamis left in room 1214, and which she still hasn’t been able to retrieve because evidence of the crime will be presented to jurors in Cruz’s trial: Her vast collection of Holocaust books, some of which students instinctively grabbed for protection as they crouched along the walls. Her trove of educational materials. A heart-shaped box of chocolates with puppies on it — a gift from a student just a short while earlier. And, the memories of the last time she saw Helena Ramsay and Nicholas Dworet, two students who were shot to death in the place where a teacher comes to school to act in loco parentis. 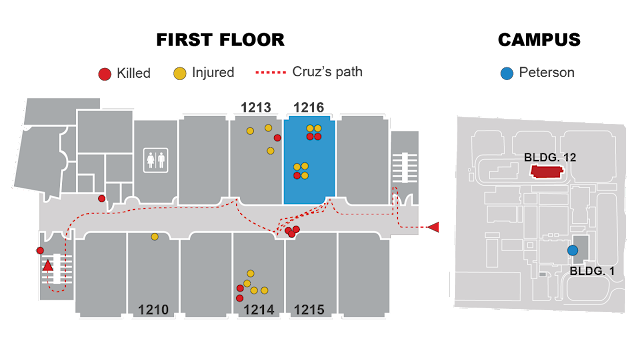