2 Kings 9:30-37 New King James Version (NKJV)
Jezebel’s Violent Death
30 Now when Jehu had come to Jezreel, Jezebel heard of it; and she put paint on her eyes and adorned her head, and looked through a window. 31 Then, as Jehu entered at the gate, she said, “Is it peace, Zimri, murderer of your master?”

32 And he looked up at the window, and said, “Who is on my side? Who?” So two or three eunuchs looked out at him. 33 Then he said, “Throw her down.” So they threw her down, and some of her blood spattered on the wall and on the horses; and he trampled her underfoot. 34 And when he had gone in, he ate and drank. Then he said, “Go now, see to this accursed woman, and bury her, for she was a king’s daughter.” 35 So they went to bury her, but they found no more of her than the skull and the feet and the palms of her hands. 36 Therefore they came back and told him. And he said, “This is the word of the Lord, which He spoke by His servant Elijah the Tishbite, saying, ‘On the plot of ground at Jezreel dogs shall eat the flesh of Jezebel; 37 and the corpse of Jezebel shall be as refuse on the surface of the field, in the plot at Jezreel, so that they shall not say, “Here lies Jezebel.” ’ ” 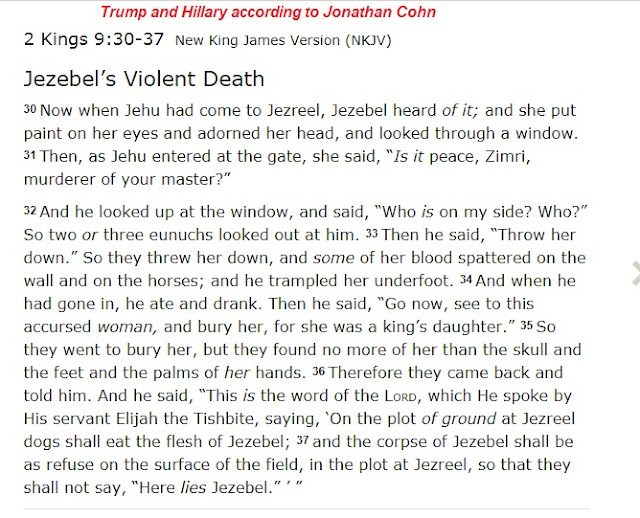