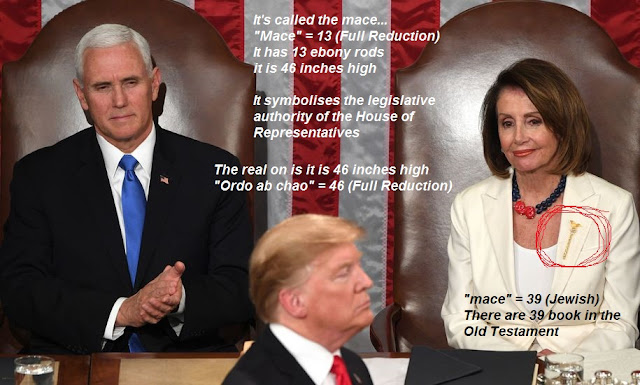 Mace of the United States House of Representatives
https://en.wikipedia.org/wiki/Mace_of_the_United_States_House_of_Representatives

It symbolises the legislative authority of the House of Representatives 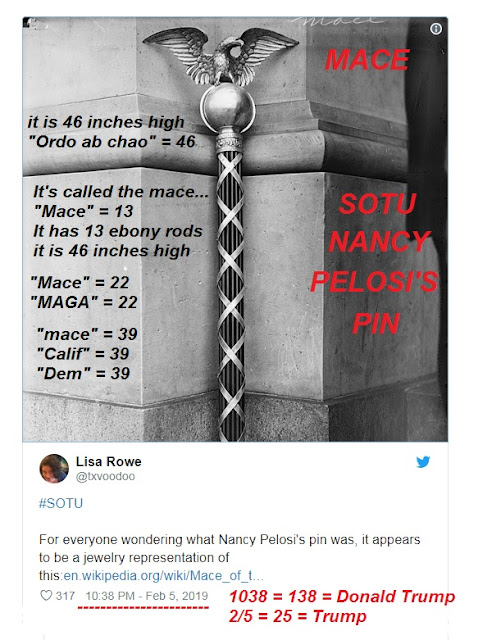 I was a life long Democrat and leftist until about 3 years ago. The final straw for me was agenda21 and decoding which showed the left's numbers as being masonry. Looking back on the French Revolution, the creation of the Illuminati and the Protocols of the Elders of Zion pretty much describes who the left really is. Even their chants are coded. They're fake and they're working for the Rothschilds IMO!

Anyway I find it interesting that mace and maga match. Maybe this was a secret message saying "I maga" I mean her husband does go to Bohemian Grove every year.

My opinion of Pelosi is that she's Jesuit trained and a Rosicrucian. In fact I think the Rosy Cross headquarters is not that far from her house. You'll notice the necklace she's wearing in this picture has roses on it. (hint hint)  The headquarters for Freemasons in California is in her district I know. Snob Hill is what I call it! I think the Democrat Party used to care for the working people but now they're run by the Rothschilds so Americans are put last. It's globalization above everything for them and I hope more Democrats catch on to their game by 2020. Probably the best thing to do is create a 3rd party that does nothing but fight globalization and anything "universal". I would join I'm sick of the theater!

Fasces (English: from the Latin word fascis, meaning "bundle" is a bound bundle of wooden rods, sometimes including an axe with its blade emerging. The fasces had its origin in the Etruscan civilization and was passed on to ancient Rome, where it symbolized a magistrate's power and jurisdiction. The axe originally associated with the symbol, the Labrys (Greek: λάβρυς, lábrys) the double-bitted axe, originally from Crete, is one of the oldest symbols of Greek civilization. To the Romans, it was known as a bipennis. Commonly, the symbol was associated with female deities, from prehistoric through historic times.

During the first half of the 20th century both the fasces and the swastika (each symbol having its own unique ancient religious and mythological associations) became heavily identified with the authoritarian/fascist political movements of Adolf Hitler and Benito Mussolini. During this period the swastika became deeply stigmatized, but the fasces did not undergo a similar process.

So Nancy Pelosi was holding a fascist stick! LOL

Maybe we should take a closer look at the jewelry they're wearing. 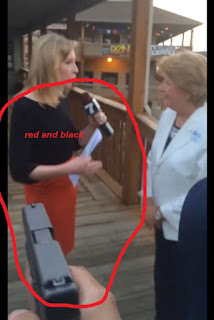 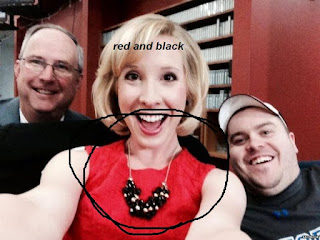 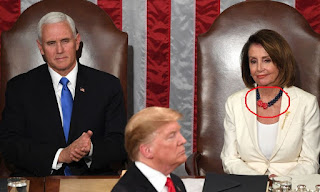