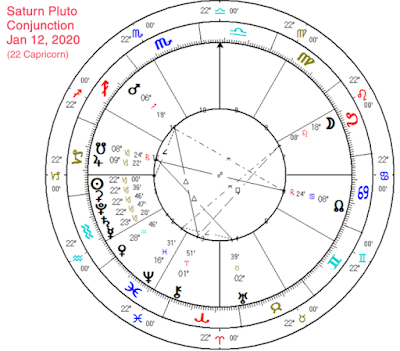 In astrology, every moment matters. The cosmic clock ticking, as planets (and luminaries) pursue their motion and form celestial patterns, provides a flavor, a meaning, or a message for each passing minute or for a whole epoch. We ourselves are the embodiment of the moment of our birth; as such, each one of us represents a moment in time. In other words, each fraction of time has a purpose.

The Saturn–Pluto cycle occurs roughly every 33 to 38 years, varying according to Pluto’s highly elliptical orbit. This meeting of forces represents, among other things, the redistribution of power in the world or, in other words, which faction will make the decisions that affect the greater collective, whether this occurs in plain sight or behind the scenes. From a spiritual perspective, this cycle reflects a rite of passage determining who is most qualified to be the custodian of resources, and thus regulates who will be in a position of influence. In its purest form, this cycle is one of the highest tests of integrity and morality for those in authority, along with a test of capacity and resilience. Beyond the management of power, this cycle is also about the skill to increase power and the value of resources.