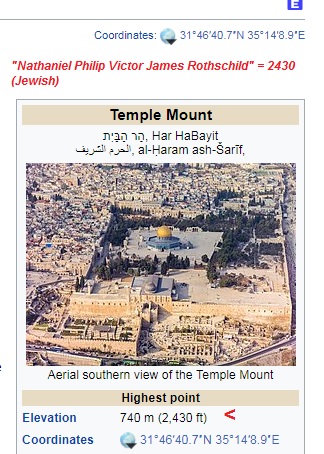 The Temple Mount (Hebrew: הַר הַבַּיִת‎, Har HaBáyit, "Mount of the House (of God, i.e. the Temple in Jerusalem)"), known to Muslims as the Haram esh-Sharif (Arabic: الحرم الشريف‎, al-Ḥaram al-Šarīf, "the Noble Sanctuary", or الحرم القدسي الشريف, al-Ḥaram al-Qudsī al-Šarīf, "the Noble Sanctuary of Jerusalem") and the Al Aqsa Compound is a hill located in the Old City of Jerusalem that for thousands of years has been venerated as a holy site, in Judaism, Christianity, and Islam alike.

The present site is a flat plaza surrounded by retaining walls (including the Western Wall) which was built during the reign of Herod the Great for an expansion of the temple. The plaza is dominated by three monumental structures from the early Umayyad period: the al-Aqsa Mosque, the Dome of the Rock and the Dome of the Chain, as well as four minarets. Herodian walls and gates, with additions from the late Byzantine and early Islamic periods, cut through the flanks of the Mount. Currently it can be reached through eleven gates, ten reserved for Muslims and one for non-Muslims, with guard posts of Israeli police in the vicinity of each.