Paul O’Neill, whose outspokenness cost him his job as President George W. Bush’s first Treasury secretary after having led Alcoa Inc. through a period of consistent profitability, has died. He was 84.

The Wall Street Journal reported O’Neill’s death on Saturday at his home in Pittsburgh. He had been under treatment for lung cancer.

His feuds with the White House were chronicled in “The Price of Loyalty,” a 2004 book that Pulitzer Prize-winning journalist Ron Suskind wrote using interviews and thousands of pages of Treasury documents provided by O’Neill.

The terrorist attacks in September 2001, which forced O’Neill to cut short a trip to Tokyo and return to Washington on a military plane, shattered the nation’s confidence and worsened the federal budget, which in 2002 fell into a deficit for the first time since 1997. The unemployment rate, at 4.2% when O’Neill was sworn into office, reached a 7 1/2-year high of 6% the month he was fired.

After leaving government, O’Neill returned to Pittsburgh, the reborn steel town where he came from to pursue his interest in making the medical industry there more efficient and advising New York-based Blackstone Group LP.

As of mid-2019, it was apparent that time hadn’t much diminished his inclination for frank discourse.

In a dispute with a local hospital board on which he served, O’Neill pulled no punches in comments carried in the local newspaper. “I discovered quickly that the board was a sham. The board meetings were a sham. They were show-and-tell about how wonderful they were; and they weren’t.”

O’Neill and his wife, Nancy, had four children: Patricia, Margaret, Julie and Paul. 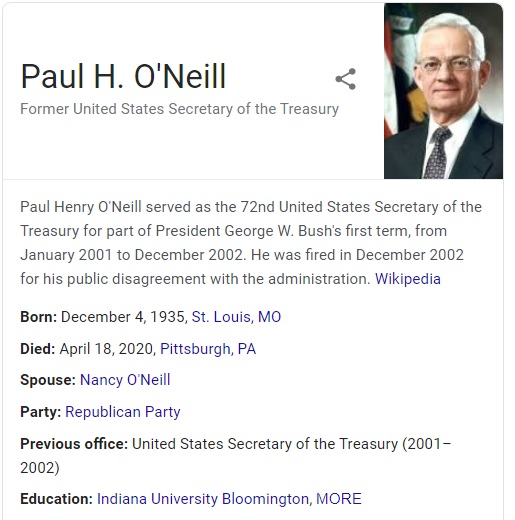 Paul Henry O'Neill (December 4, 1935 – April 18, 2020) served as the 72nd United States Secretary of the Treasury for part of President George W. Bush's first term, from January 2001 to December 2002. He was fired in December 2002 for his public disagreement with the administration. Prior to his term as Secretary of the Treasury, O'Neill was chairman and CEO of Pittsburgh-based industrial giant Alcoa and chairman of the RAND Corporation.

O'Neill was born in St. Louis, Missouri and resided in Pittsburgh. He met his wife at Anchorage High School in Anchorage, Alaska, from which they both graduated in 1954. He lived on the military base there with his parents. He received a bachelor's degree in Economics from California State University, Fresno, studied economics at Claremont Graduate University in 1961, and received a Master of Public Administration from Indiana University. O'Neill and his wife Nancy Jo had four children, 12 grandchildren, and 15 great grandchildren.

O'Neill began his public service as a computer systems analyst with the Veterans Administration, where he served from 1961 to 1966. He joined the United States Office of Management and Budget in 1967, and was deputy director of OMB from 1974 to 1977.

In an October 16, 2007 Op Ed published in the New York Times, he wrote of the reluctance among politicians to address comprehensive reform in the U.S. health care system. In the opinion, he suggested that doctors and hospitals should be required to report medical errors within 24 hours, as well as moving malpractice suits out of the civil courts and into a new, independent body. He also felt that health care reform had to acknowledge all aspects of the problem, such as insurance coverage, medical costs, quality of care, and information technology.

In April 2016, he was one of eight former Treasury secretaries who called on the United Kingdom to remain a member of the European Union ahead of the June 2016 Referendum. 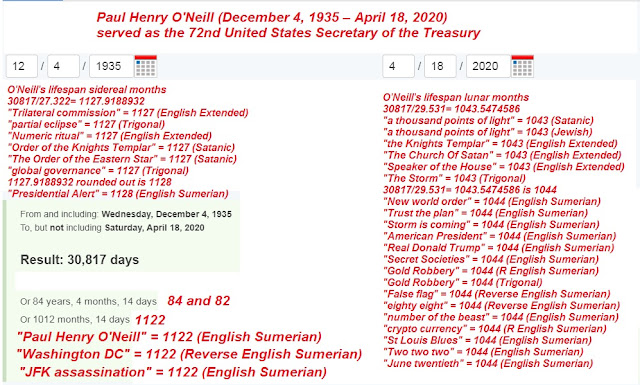