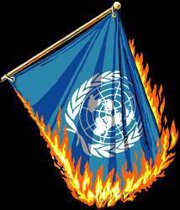 Latest Action: 01/03/2017 Referred to the House Committee on Foreign Affairs

This bill repeals the United Nations Participation Act of 1945 and other specified related laws.

The bill requires: (1) the President to terminate U.S. membership in the United Nations (U.N.), including any organ, specialized agency, commission, or other formally affiliated body; and (2) closure of the U.S. Mission to the United Nations.

The bill prohibits: (1) the authorization of funds for the U.S. assessed or voluntary contribution to the U.N., (2) the authorization of funds for any U.S. contribution to any U.N. military or peacekeeping operation, (3) the expenditure of funds to support the participation of U.S. Armed Forces as part of any U.N. military or peacekeeping operation, (4) U.S. Armed Forces from serving under U.N. command, and (5) diplomatic immunity for U.N. officers or employees.