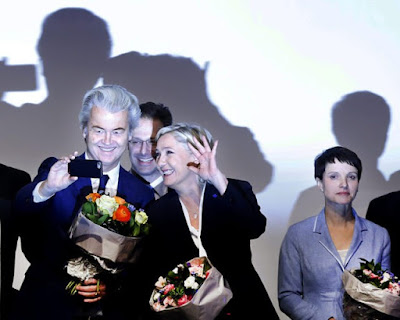 Marine Le Pen is one course to win the first round of voting in this year’s French presidential elections, a shock poll has revealed.

The Front National leader is still likely to lose out in the second round voting, however, as those from both left and right will unite against her, the Kantar-Sofres poll for Le Figaro suggested.
In the first-round vote in April, Ms. Le Pen would come first with 25 per cent. Conservative candidate François Fillon would garner 21-22 per cent and centrist Emmanuel Macron can expect 20-21 per cent.


In the runoff to be held on May 7th, both Mr. Fillon and Mr. Macron are projected to win if either is pitted against Ms. Le Pen, while Mr. Macron would beat Mr. Fillon in the knockout.
http://www.breitbart.com/london/2017/01/30/le-pen-favourite-win-first-round-french-presidential-vote/