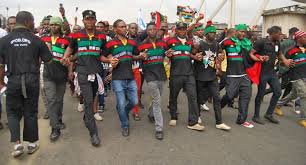 Supporters of the Indigenous People of Biafra (IPOB) march in Port Harcourt on January 20, 2017 in support of the US president-elect (AFP Photo/STRINGER)


Lagos (AFP) - Police in Nigeria on Sunday said they had arrested 65 people at a demonstration of support for US President Donald Trump organised by pro-independence activists in the country's south.
The rally, which took place on Friday in the southern oil hub of Port Harcourt, was organised to coincide with the billionaire businessman's inauguration as the 45th US president.
It was organised by a pro-Biafra group advocating an independent state in southeastern Nigeria and was held on the eve of massive demonstrations against Trump across the globe.
"Some suspected members of the Indigenous People of Biafra (IPOB)... staged an unlawful protest in the Port Harcourt metropolis," said Rivers State's deputy police chief Ahmed Magaji.
https://www.yahoo.com/news/nigeria-arrests-65-pro-trump-rally-190819914.html

Liberals got to keep those black people on the voting plantation!