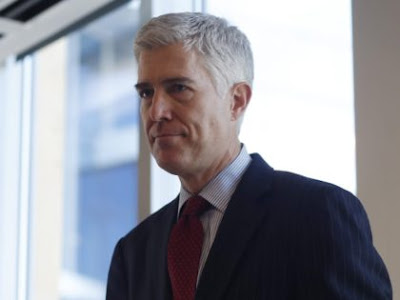 President George W. Bush appointed Gorsuch to the federal bench in 2006, after he worked in the Bush administration for two years as a deputy associate attorney general at the U.S. Department of Justice. Gorsuch currently serves as a judge on the U.S. Court of Appeals for the Tenth Circuit, which has jurisdiction over Wyoming, Kansas, Oklahoma, Utah, New Mexico, and his native Colorado.
Gorsuch is considered one of the most intellectual jurists on the federal bench, evinced by his gilded pedigree. He received his undergraduate degree from Columbia University in 1988 and graduated from Harvard Law School in 1991. Later in his career, he earned a Ph.D. from Oxford University in 2004. He would be the first Supreme Court justice in decades to hold a doctoral degree.


He’s had a picture-perfect legal career. He served as a law clerk for Judge David Sentelle on the U.S. Court of Appeals for the D.C. Circuit, then clerked for both Justice Byron White and later Justice Anthony Kennedy on the U.S. Supreme Court. He went on to a very successful career in the private sector before joining the Bush Justice Department in 2005.
http://www.breitbart.com/big-government/2017/01/31/trump-nominates-judge-neil-gorsuch-supreme-court/
Posted by JE Aggas at 5:37 PM