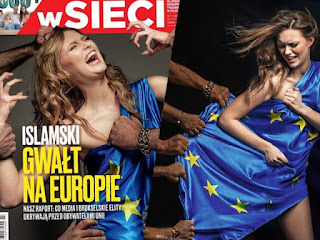 
The incident took place between 5.30 pm and 7.30 pm on Thursday evening in Kiel, the capital of Germany's northernmost state, Schleswig-Holstein.
As the teenagers aged between 15 and 17 went for dinner together, they were followed by two young men, both from Afghanistan, police report.
The two men then started filming the girls with their phones as they sat in a restaurant near the harbour.
According to statements the girls gave police, the men then appeared to send the video or pictures to other people.
Within a few minutes a group of up to 30 men had arrived at outside the restaurant.
Read more here..Link
Posted by JE Aggas at 1:11 PM