"Political Islam" is the Future of Europe - EU Security Head

As the threat from ISIS extremists grows, the European Union’s head of foreign affairs and security policy Federica Mogherini has caused consternation by asserting that “political Islam” is a firm part of Europe’s future.
Responding to last month’s brutal Islamist terror attacks in Tunisia, Kuwait and France, Mogherini dismissed the idea of a clash of civilizations and shot back at critics of mass immigration.
“Islam belongs in Europe. It holds a place in Europe’s history, in our culture, in our food and – what matters most – in Europe’s present and future,” wrote Mogherini, before adding, “I am not afraid to say that political Islam should be part of the picture. Religion plays a role in politics – not always for good, not always for bad. Religion can be part of the process. What makes the difference is whether the process is democratic or not.”
In promoting “political Islam” as part of the future of Europe, Mogherini is violating the very notion that western democracy is supposed to be based on the fundamental principle of separation of church and state (or mosque and state in this case)
Link

EU's head of security said what about political Islam? Video

Federica Mogherini  born 16 June 1973) is an Italian politician and the current High Representative of the European Union for Foreign Affairs and Security Policy and Vice-President of the European Commission in the Juncker Commission since 1 November 2014.

Mogherini was Italy's Minister for Foreign Affairs and International Cooperation from 22 February 2014 until 31 October 2014 in the centre-left Cabinet of Matteo Renzi.

She is a member of the Italian Democratic Party and the Party of European Socialists.

Mogherini attended the Sapienza University of Rome where she studied Political Science graduating with a Diploma in Political Philosophy with a thesis entitled "Relationship between religion and politics in Islam", which she wrote whilst on the Erasmus programme at Aix-en-Provence, France.
https://en.wikipedia.org/wiki/Federica_Mogherini

Mogherini will change Europe into an Islamic hell

“One could almost get curious about the content of that thesis. But even without this knowledge, enough has meanwhile become clear about Mogherini: a gushing islamophile, of whom we are not sure whether she is more stupid than malicious, but who is at a position that makes her deathly dangerous for Europe and Israel and the West. “
http://snaphanen.dk/2015/07/28/mogherini-will-change-europe-into-an-islamic-hell/ 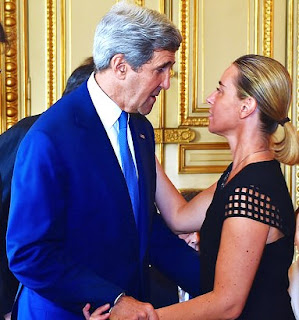