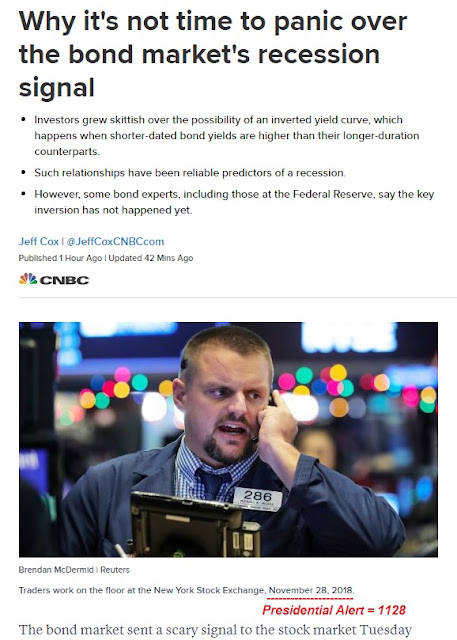 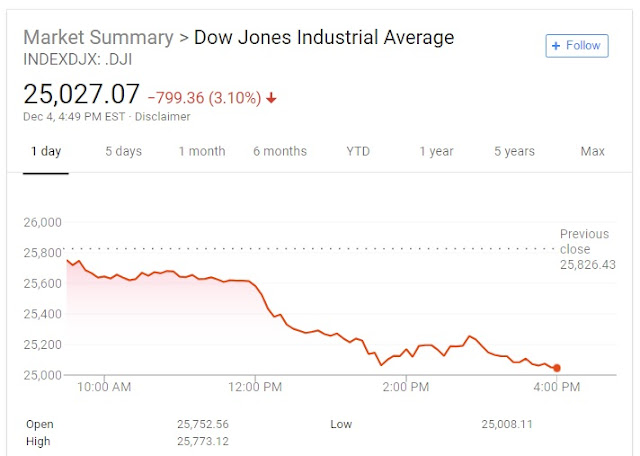 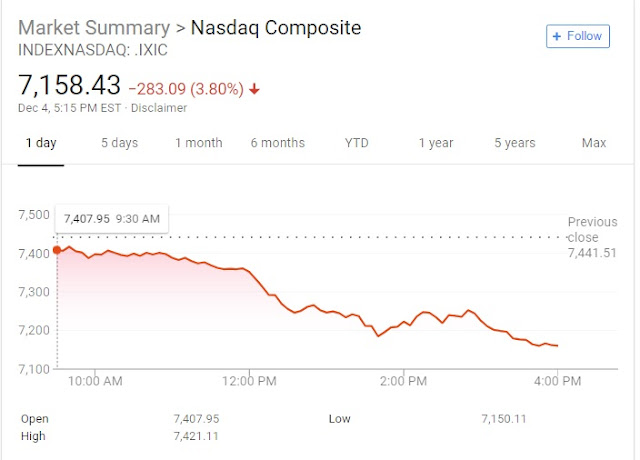 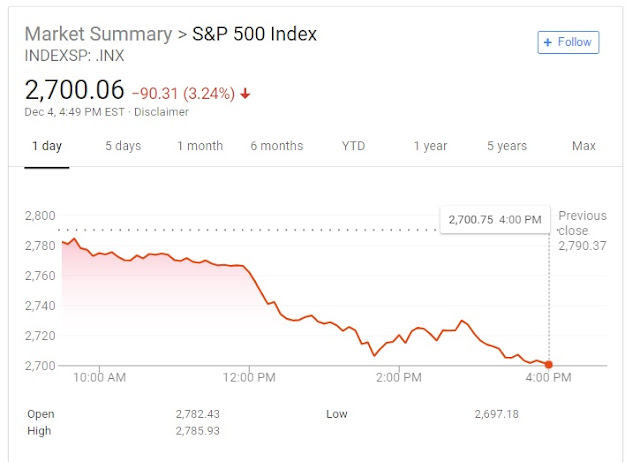 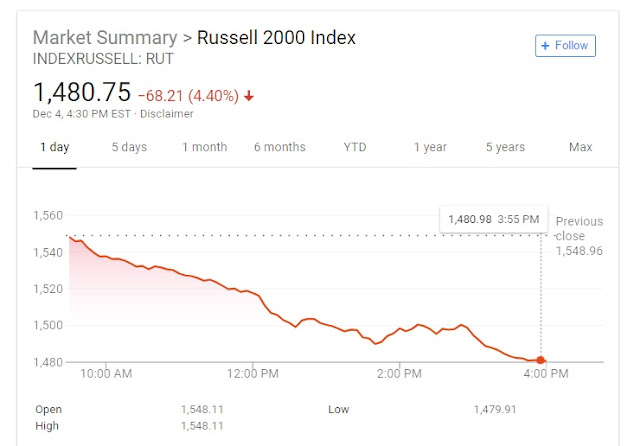 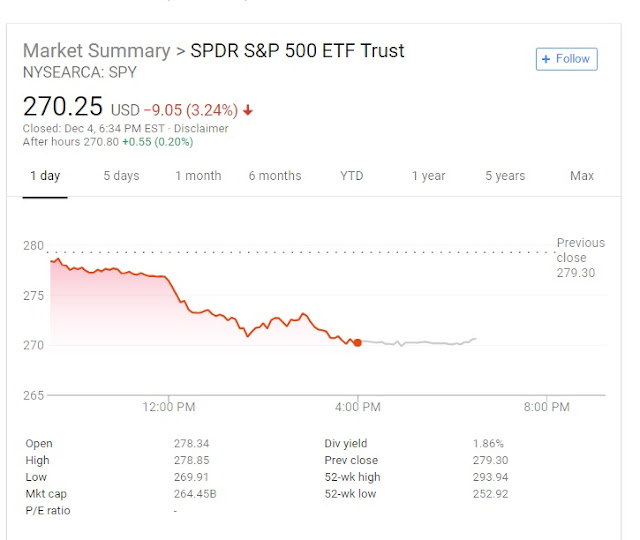 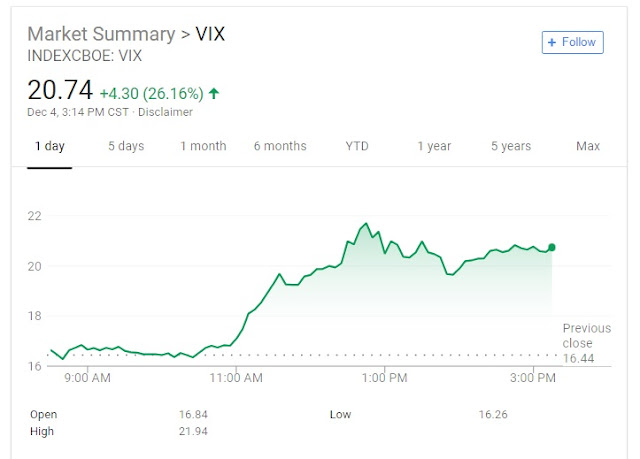 U.S. two-year Treasury yields rose above three-year Treasury yields on Tuesday for the first time in more than a decade as traders piled on bets the Fed might be close to ending its rate-hike campaign. The Dow Jones Industrial Average closed down nearly 800 points, or 3.10 percent, and the Standard & Poor’s 500 fell over 90 points, or 3.24 percent.

“If the bond market trusts the Fed’s latest words about ‘data dependency’ then the totally flat Treasury note curve is predicting softer future growth (and) will stay the Fed’s hand,” said Gundlach, who oversees more than $123 billion in assets.

“If that is indeed to be the case, the recent strong equity recovery is at risk from fundamental economic deterioration, a message that is sounding from the junk bond market, whose rebound has been far less impressive,” he said.

Yield curve inversions are seen generally as precursors of a recession. An inversion of the two-year and 10-year yields has preceded each U.S. recession in the past 50 years.

So far, there has been no inversion of the two-year and 10-year. The benchmark 10-year yield clung to an 11-basis-point margin over its two-year counterpart, although it was the smallest in over a decade.

The yield curve is a graph of interest rates on government bonds by their months or years until the bonds' principal must be repaid. The yield curve typically shows those rates for the Fed Funds rate (which is very short term), 3-month, 2-year, 7-year, 10-year, and 30-year.

As I first learned when I read William Greider's, Secrets of the Temple, the yield curve typically slopes upward -- with short-term rates lower than long-term ones.

The reason is that when the economy is expanding, investors are optimistic about the future so they are eager to borrow money at low rates and invest it in assets that they believe will grow in value and pay off in the future.

However, as Greider explained so well, the Fed can engineer a recession by raising short-term rates -- signaling its pessimism about the future -- and in so doing, causing the yield curve to invert.

The most extreme case of this was in the early 1980s when Fed Chair Paul Volcker wanted to rid the U.S. economy of inflationary expectations by hiking the Fed Funds rate up near 20%.

This strategy caused a whopping recession as short-term credit became very expensive and people saw no reason to take the risk of investing for the long-term when they could put their funds in a money market fund and earn a nearly 20% return.

One particular yield curve -- the one for U.S. Treasury Department securities -- is a particularly powerful predictor of economic conditions. These are sold in 12 maturities -- One-month, two-month, three-month, and six-month bills; One-year, two-year,  three-year, five-year, and 10-year Treasury notes. and 30-year bonds, according to The Balance.

As The Balance wrote:

This is investors' way of saying that the economy will be a little better in 2023 than it will be in 2021.

The Treasury yield curve has been a good predictor of recessions in the past -- offering warnings of the recessions of 2000, 1991, and 1981.

The yield curve stayed inverted for almost a year and it was not until September 2007 that the Fed started lowering the Fed Funds rate to 4.75% -- cutting them to zero by the end of 2008.

The yield curve was then upward sloping -- but the economy was in free fall.

The Treasury yield curve has been a good predictor of recessions in the past -- offering warnings of the recessions of 2000, 1991, and 1981.
But for the 2008 financial crisis, the yield curve was early. The first inversion occurred on December 22, 2005. 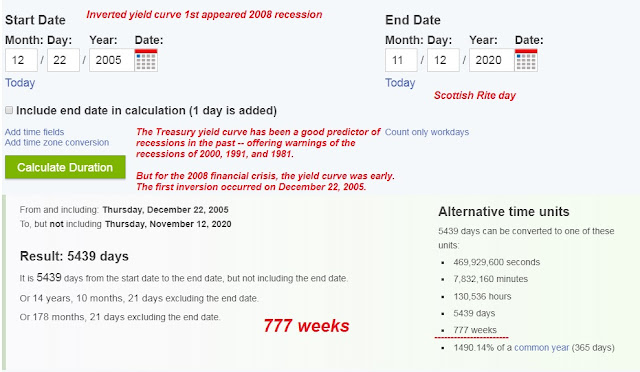