Most people don't see and experience the most exciting astronomical events not because they don't care, but because they don't make a plan. So here's some advance warning. 2019 will start with a rare 'Super Blood Wolf Moon' eclipse, but it's only the first of many incredible stargazing events in 2019. From eclipses and comets to supermoons and a Transit of Mercury, here's exactly when, where and why to look up at the night sky during 2019.
https://www.forbes.com/sites/jamiecartereurope/2018/12/11/blood-moon-visible-from-north-america-kicks-off-a-year-of-extra-special-celestial-sights/#73f7ab1d5bdf 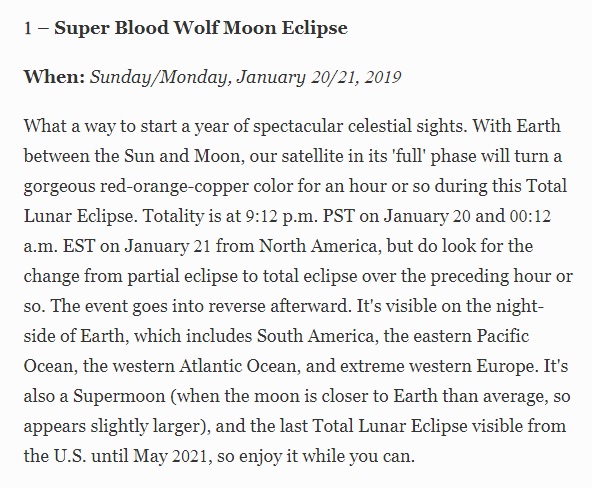 Tu BiShvat / טו בשבט
Tu BiShvat or Tu B'Shevat or Tu B'Shvat (Hebrew: ט״ו בשבט‎) is a minor Jewish holiday, occurring on the 15th day of the Hebrew month of Shevat. It is also called "The New Year of the Trees" or (Hebrew: ראש השנה לאילנות, Rosh HaShanah La'Ilanot‎). Tu BiShvat is one of four "New Years" mentioned in the Mishnah. 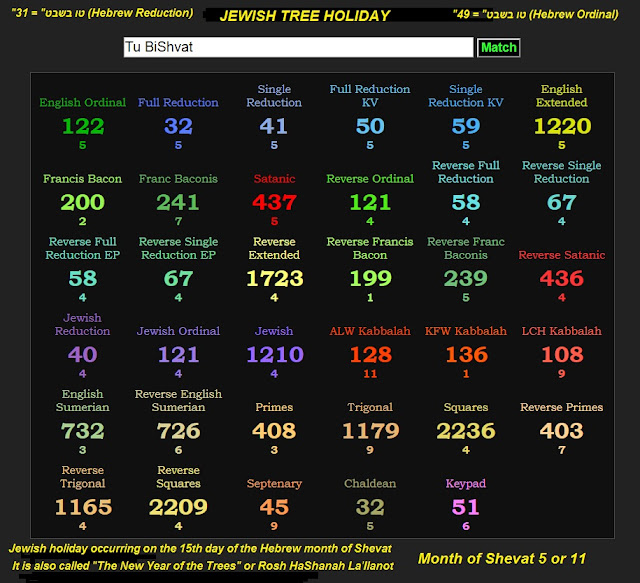 From tree of life synagogue shooting to WH and Rockefeller center lighting their Christmas trees both on 11/28 is 33 days
From and including: Saturday, October 27, 2018
To and including: Wednesday, November 28, 2018
Result: 33 days 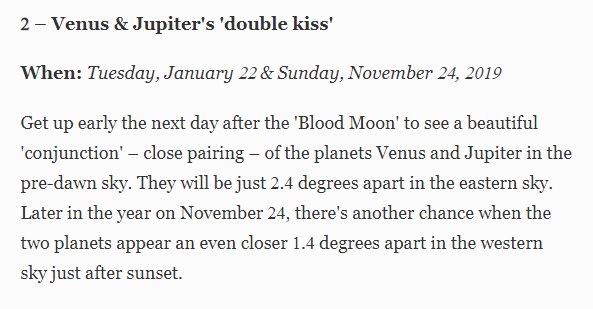 
Get up early the next day after the 'Blood Moon' to see a beautiful 'conjunction' – close pairing – of the planets Venus and Jupiter in the pre-dawn sky. They will be just 2.4 degrees apart in the eastern sky. Later in the year on November 24, there's another chance when the two planets appear an even closer 1.4 degrees apart in the western sky just after sunset. 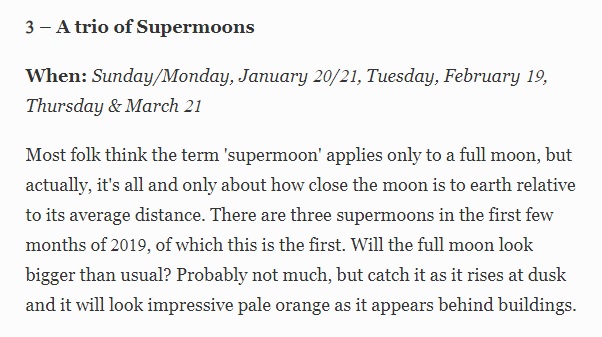 3 – A trio of Supermoons

March 21st is the day after spring equinox and on Purim 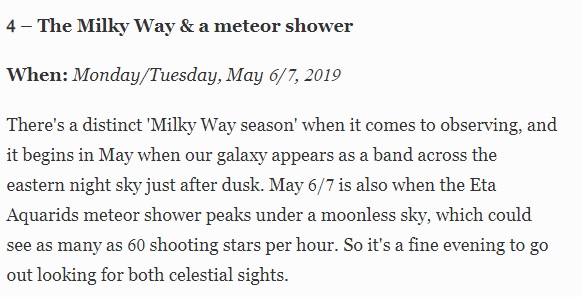 There's a distinct 'Milky Way season' when it comes to observing, and it begins in May when our galaxy appears as a band across the eastern night sky just after dusk. May 6/7 is also when the Eta Aquarids meteor shower peaks under a moonless sky. 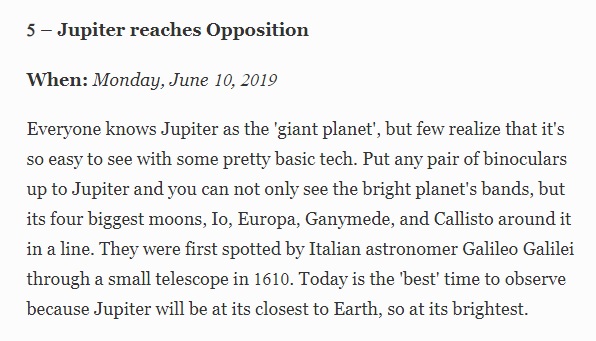 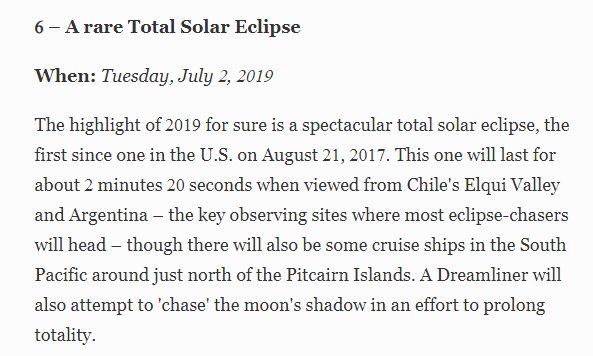 The highlight of 2019 for sure is a spectacular total solar eclipse, the first since one in the U.S. on August 21, 2017. This one will last for about 2 minutes 20 seconds when viewed from Chile's Elqui Valley and Argentina – the key observing sites where most eclipse-chasers will head. 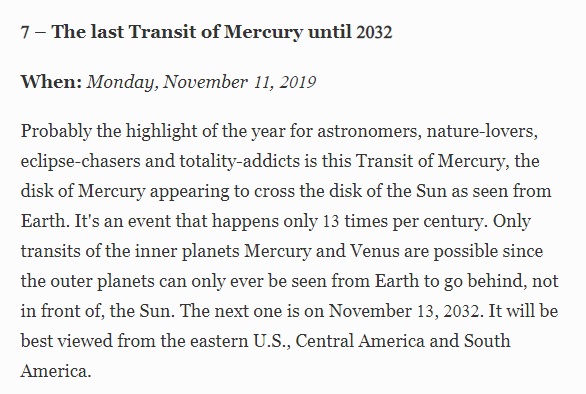 Probably the highlight of the year for astronomers, nature-lovers, eclipse-chasers and totality-addicts is this Transit of Mercury, the disk of Mercury appearing to cross the disk of the Sun as seen from Earth. It's an event that happens only 13 times per century. Only transits of the inner planets Mercury and Venus are possible since the outer planets can only ever be seen from Earth to go behind, not in front of, the Sun. The next one is on November 13, 2032. It will be best viewed from the eastern U.S., Central America and South America. 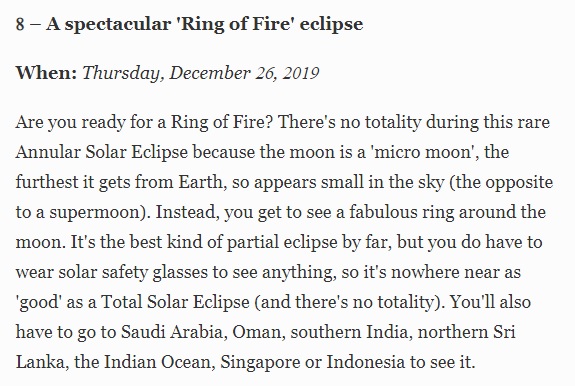 8 – A spectacular 'Ring of Fire' eclipse

Are you ready for a Ring of Fire? There's no totality during this rare Annular Solar Eclipse because the moon is a 'micro moon', the furthest it gets from Earth, so appears small in the sky (the opposite to a supermoon). Instead, you get to see a fabulous ring around the moon. It's the best kind of partial eclipse by far, but you do have to wear solar safety glasses to see anything, so it's nowhere near as 'good' as a Total Solar Eclipse (and there's no totality). You'll also have to go to Saudi Arabia, Oman, southern India, northern Sri Lanka, the Indian Ocean, Singapore or Indonesia to see it.