Pizzagate and Desmond the drag kid.....

In my opinion. I thought it was real when it happened and I still think it's real!

A video pointed out a painting behind Desmond the drag kid during an interview with two men had the drug Rohypnol on it, a date rape drug. At this point I don't how much more obvious they can make what’s really going on is happening. 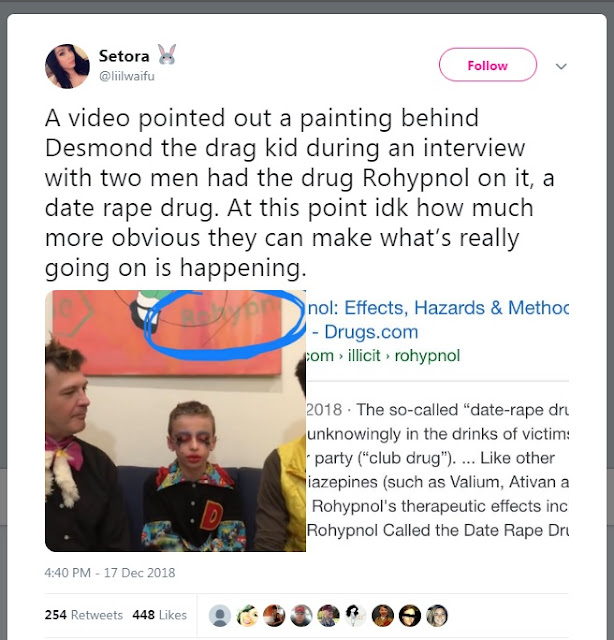 The guy on the left of the kid is Michael Alig. He cut up a guys body and threw it in the river... 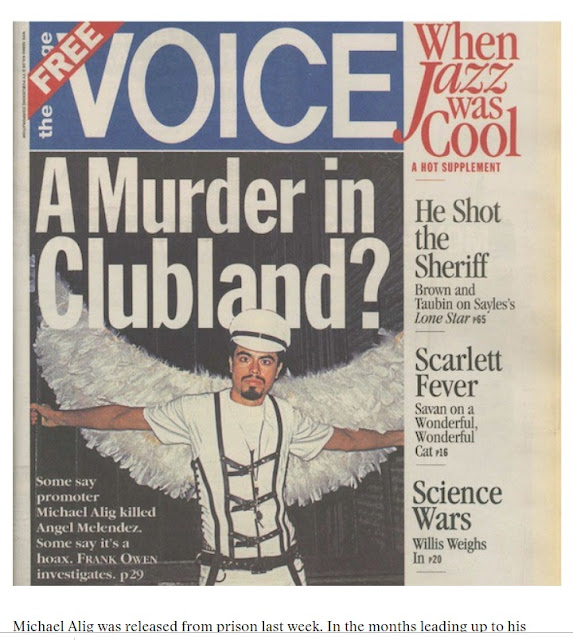 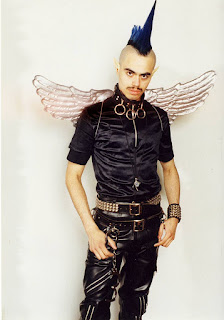 Andre "Angel" Melendez was regular on the New York City club scene and worked at The Limelight, among other clubs, where he sold drugs on the premises. After The Limelight was closed by federal agents and an investigation found that Gatien was allowing drugs to be sold there, Melendez was fired. Shortly thereafter, he moved into Alig's Riverbank West apartment On the night of March 17, 1996, Alig and his roommate, Robert D. "Freeze" Riggs, murdered Melendez after an argument in Alig's apartment over many things, including a long-standing drug debt. Alig has claimed many times that he was so high on drugs that his memory of the events is unclear.

After Melendez's death, Alig and Riggs did not know what to do with the body. They initially left it in the bathtub, which they filled with ice. After a few days, the body began to decompose and became malodorous. After discussing what to do with Melendez's body and who should do it, Riggs went to Macy's to buy knives and a box. In exchange for 10 bags of heroin, Alig agreed to dismember Melendez's body. He cut the legs off, put them in a garbage bag, cut off the head and put it in another bag, and stuffed the rest into a box. Afterwards, he and Riggs threw the box into the Hudson River.

In the weeks following Melendez's disappearance, Alig allegedly told "anyone who would listen" that he and Riggs had killed him. Most people did not believe Alig and thought his "confession" was a ploy to get attention.

However, Michael Musto recalls: "By the time Alig sent out a party invite joking about the murder, a lot of people wanted to kill him (especially since a source was floating a more premeditated version of the killing)

Michael Alig (born April 29, 1966) is an American former club promoter, musician, and writer who served almost 17 years in prison for manslaughter. Alig was a founder and ringleader of the Club Kids, a group of young New York City clubgoers that became a cultural phenomenon during the late 1980s and early 1990s.

In March 1996, Alig and his roommate, Robert D. "Freeze" Riggs, killed fellow Club Kid Andre "Angel" Melendez in a confrontation over a delinquent drug debt. In October 1997, Alig pled guilty to first-degree manslaughter. Both men were sentenced to 10 to 20 years in prison; Riggs was released on parole in 2010

They made a movie about it of course! Party Monster....

In the movie Party Monster (based on the Alig murder), Alig is played by Macaulay Culkin. The movie also stars Seth Green, Marilyn Manson, and Wilmer Valderrama. Culkin is in a band named Pizza Underground. 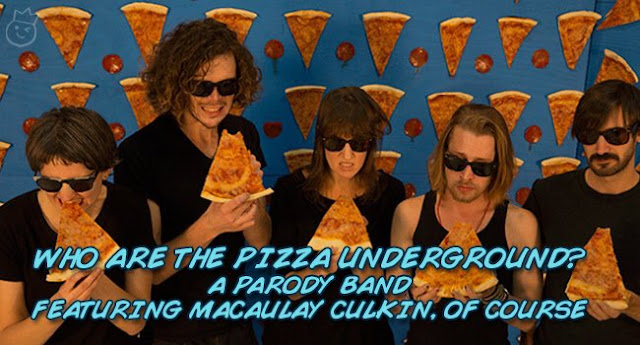 Party Monster is a 2003 American factually based biographical drama film directed by Fenton Bailey and Randy Barbato, and starring Macaulay Culkin as the drug-addled "king of the Club Kids". The film tells the story of rise and fall of the infamous New York City party promoter Michael Alig. This was Macaulay Culkin's first film in nearly nine years since his starring role in the 1994 film Richie Rich.

The film is based on Disco Bloodbath, the memoir of James St. James which details his friendship with Alig, that later fell apart as Alig's drug addiction worsened, and ended after he murdered Angel Melendez and went to prison. A 1998 documentary on the murder, also called Party Monster: The Shockumentary, was used for certain elements of the film.

Based on the book Disco Bloodbath, by James St. James, the film opens with Michael Alig as a small-town outcast who lived with his mom before moving to New York. Michael learns the New York party scene from James St. James, who teaches him the "rules of fabulousness", which mostly revolve around attracting as much attention to oneself as possible.

Despite James' warning, Alig hosts a party at The Limelight, a local club owned by Peter Gatien. With Alig as its main attraction, The Limelight soon becomes the hottest club in New York. Alig is named "King of the Club Kids" and goes on a cross country journey in search of more club kids. Alig and James pick up Angel Melendez, Gitsie, and Brooke. Gitsie becomes Michael's latest sidekick although the movie implies the relationship was a little more than platonic. However, after Michael descends further into drug abuse, his life starts to spiral out of control, eventually culminating in his involvement in the murder of Angel. Gitsie and Michael decide to go to rehab but ultimately return to NY with the same drug problems as before, causing Michael to lose his job and end up in a motel in New Jersey. James then begins to write his "Great American Novel", published first as Disco Bloodbath and later as Party Monster.

And here's more on this poor kid. His parents are having him dance at gay bars for money.

An 11-year-old boy known as “Desmond Is Amazing” danced on stage at a New York gay bar while grown men tossed dollar bills at him.

Notice how Google doesn't take this video down!

For reasons that suddenly make sense, the bar enforces a strict ban on cell phone usage.
One Yelp reviewer wrote that the bar makes you “put your phone into a locked magnet pouch at the door, so it can’t be used while there. You can slip it into your pocket but can’t get in the pouch.”
Another explained it this way: “The club put our phones in these locked sleeves, which we could [carry] around the club.”
The first to report this about the sexual exploitation of this child was a YouTuber named Yosef Ozia, who connected all these dots based on the Yelp reviews:
https://www.breitbart.com/entertainment/2018/12/19/11-year-old-dances-gay-bar/
Posted by JE Aggas at 10:36 AM