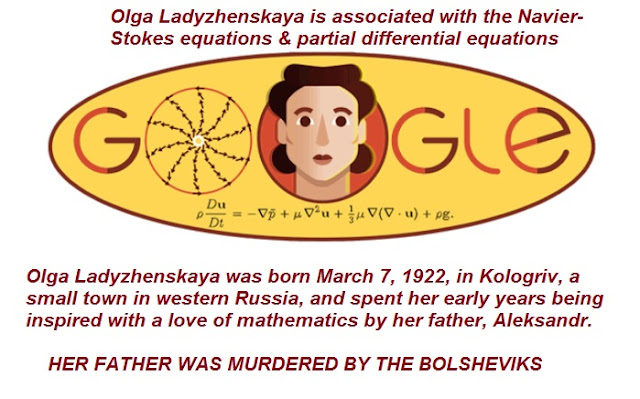 Olga Ladyzhenskaya is associated with the Navier-Stokes equations and partial differential equations.

Olga Ladyzhenskaya was born March 7, 1922, in Kologriv, a small town in western Russia, and spent her early years being inspired with a love of mathematics by her father, Aleksandr.
HER FATHER WAS MURDERED BY THE BOLSHEVIKS

Ladyzhenskaya was born and grew up in the small town of Kologriv, the daughter of a mathematics teacher who is credited with her early inspiration and love of mathematics. The artist Gennady Ladyzhensky was her grandfather's brother, also born in this town. In 1937 her father was arrested by the NKVD and executed as an "enemy of the people". Ladyzhenskaya completed high school in 1939, but due to her father's status was not admitted to Leningrad University

She was know for....
Hilbert's nineteenth problem is one of the 23 Hilbert problems, set out in a list compiled in 1900 by David Hilbert. It asks whether the solutions of regular problems in the calculus of variations are always analytic. Informally, and perhaps less directly, since Hilbert's concept of a "regular variational problem" identifies precisely a variational problem whose Euler–Lagrange equation is an elliptic partial differential equation with analytic coefficients. Hilbert's nineteenth problem, despite its seemingly technical statement, simply asks whether, in this class of partial differential equations, any solution function inherits the relatively simple and well understood structure from the solved equation.
https://en.wikipedia.org/wiki/Hilbert%27s_nineteenth_problem