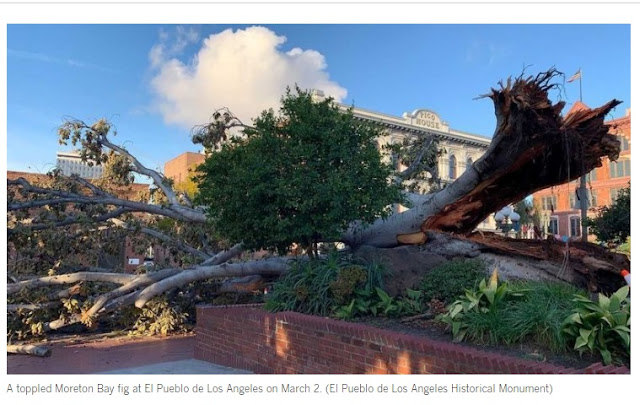 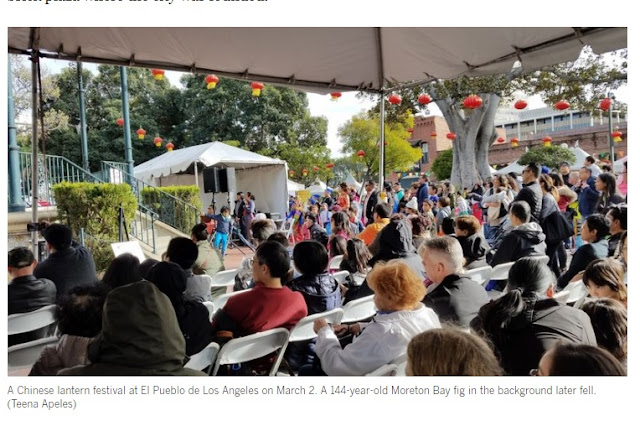 After more than 140 years, a massive fig tree gracing the plaza where Los Angeles was founded collapses

They were doing the line dance when what sounded like firecrackers split the air.

Because the sound was to be expected at a Chinese lantern festival, no one immediately noticed the demise of a fig tree that for 144 years had watched skyscrapers built around it and a freeway carved out beside it; that saw the changing fashions and hairstyles of the people beneath it; that sheltered a growing number of homeless people from rain and sun.

“We saw the lanterns attached to the tree start to go,” said Teena Apeles, whose daughter’s troupe was waiting to perform. “We knew something was wrong.”

The tree seemed to fall in slow motion, the swoop of its descent dramatized by the red paper lanterns strung from its branches, Apeles said.

And with that, the four Moreton Bay figs that have towered for more than 140 years over the cradle of Los Angeles were three.

Since 1875, the trees had formed a kind of compass circling El Pueblo de Los Angeles, the brick plaza where the city was founded.

The four figs were planted at El Pueblo by agriculturalist and City Councilman Elijah Hook Workman, KCET reported in 2013. The Ficus macrophylla was brought from Australia to Southern California in the 1860s and 1870s, probably to provide shade and ornamentation, said Donald Hodel, a horticulture advisor for the University of California’s Cooperative Extension.

Today, there is barely a stump where the fig stood for 144 years at the southern point of El Pueblo’s plaza. The tree was cut up with chain saws and hauled away with a crane.