Brookings Claims Panama Papers Are Putin Blackmail of US Officials 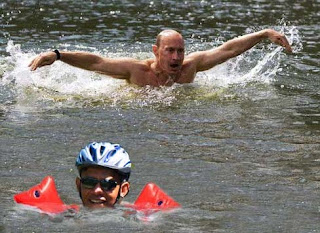 A US think-tank is desperate to raise offshore cash

Clifford Gaddy (lead image, left) has never recovered from his 20-year infatuation with Anatoly Chubais and Alexei Kudrin. Neither has Gaddy’s boss at Brookings Institution in Washington, Strobe Talbott, the regime changer-in-chief at the State Department in the 1990s, when Boris Yeltsin was his man in the Kremlin, and the rest of the country too weak to resist.

If only they ruled Russia today, President Chubais, Prime Minister Kudrin or vice versa, instead of President Vladimir Putin, there could never ever be the Kremlin plot Gaddy and Brookings charged last week for blackmailing United States officials and their allies with something like the Panama Papers.  A regime-changing plot like that isn’t as preposterous as it sounds --  not because Putin thought of it, as Gaddy now claims,  but because Gaddy and Talbott used it a good many times themselves  in Moscow, and in Belgrade too, until Putin put a stop to them.  For lossmaking Brookings, however, putting a stop to Putin’s plotting is a desperate advertisement for badly needed funds.

“Are the Russians actually behind the Panama Papers?” is the title of Gaddy’s indictment. It isn’t an opinion-page piece placed in a newspaper. There’s no institutional disclaimer either. It is an official publication of the Brookings think-tank where Gaddy is chief expert on Russia, and Talbott is chief executive.

Also, the question isn’t a genuine one, because Gaddy’s answer is yes. “My thinking”, he says,   ignoring the subjunctives, conditionals, and the cyrillization of  control (контроль) –“is this could have been a Russian intelligence operation, which orchestrated a high-profile leak and established total credibility by ‘implicating’ (not really implicating) Russia and keeping the source hidden. Some documents would be used for anti-corruption campaigns in a few countries—topple some minor regimes, destroy a few careers and fortunes. By then blackmailing the real targets in the United States and elsewhere (individuals not in the current leak), the Russian puppet masters get ‘kontrol’ and influence.”