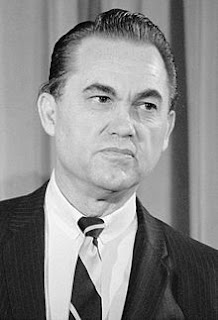 At the time George Wallace was considered a moderate on racial issues. As a delegate to the 1948 Democratic National Convention, he did not join the Dixiecrat walkout at the convention, despite his opposition to U.S. President Harry S. Truman's proposed civil rights program. Wallace considered it an infringement on states' rights.

The 1948 Democratic National Convention was held at Convention Hall in Philadelphia, Pennsylvania, from July 12 to July 14, 1948, and resulted in the nominations of President Harry S Truman for a full term and Senator Alben W. Barkley of Kentucky for Vice President in the 1948 presidential election.

In a speech to the convention, Humphrey urged the Democratic Party to "get out of the shadow of states' rights and walk forthrightly into the bright sunshine of human rights." The convention adopted the civil rights plank in a close vote (651½-582½).

"In response, all 22 members of the Mississippi delegation, led by Governor Fielding L. Wright and former Governor Hugh L. White, walked out of the assembly. Thirteen members of the Alabama delegation followed, led by Leven H. Ellis. The bolted delegates and other Southerners then formed the States' Rights Democratic Party ("Dixiecrats"), which nominated Strom Thurmond for President and Wright for Vice President.'

In 1958, Wallace ran in the Democratic primary for governor.

Wallace's main opponent was state attorney general John Malcolm Patterson, who ran with the support of the Ku Klux Klan, an organization Wallace had spoken against. Wallace was endorsed by the NAACP. Wallace lost the nomination by over 34,400 votes.

So Wallace, who was indorsed by the NAACP, lost the election to a KKK member!

John Malcolm Patterson (born September 27, 1921) is a retired American politician who was the 44th Governor of the U.S. state of Alabama.

Patterson ran with the support of the Ku Klux Klan when he won the Governorship of Alabama in 1958.

In 1954, Patterson's father ran for state attorney general in the state's Democratic primary on a platform promising to eliminate crime in the mob-controlled town of Phenix City, where he lived, and also across the state.

Albert Patterson was shot to death in Phenix City less than two weeks later on June 18, 1954. John Patterson replaced his father on the ballot, and as expected won the general election handily.

Patterson continued to fight organized crime, but became better known for his actions in opposition to civil rights. Following the 1954 Supreme Court decision in Brown v. Board of Education, which ordered an end to racial segregation in public schools.

Role in the Bay of Pigs invasion

In 1959, Patterson was approached by the CIA to allow Alabama air national guardsmen to help train pilots preparing for an invasion of Castro's Cuba. Assured that the project had the backing of President Eisenhower (Patterson had served on Eisenhower's staff during the war), Patterson gave his assent.

During the 1960 presidential campaign Patterson was among a handful of Southern governors who backed John F. Kennedy for president. He raised money, collected delegates loyal to Kennedy within the state of Alabama and led the state's delegation to the 1960 Democratic convention in Los Angeles. Patterson informed Kennedy of the plan, thinking that carrying out the invasion before election day would have benefited Kennedy's Republican opponent, Vice President Richard M. Nixon. Only a few months into his presidency, Kennedy approved a modified version of the invasion plan.

Patterson left office in 1963; at the time the Constitution of Alabama did not allow governors to run for immediate reelection. His Democratic opponent, from 1958, George Wallace, succeeded him. In 1966 Patterson ran a second time for governor but was defeated by Wallace's wife, Lurleen.

Governor of Alabama 1962
He won a crushing victory in the November general election, taking 96 percent of the vote

Governor Wallace stood in front of Foster Auditorium at the University of Alabama on June 11, 1963. This became known as the "Stand in the Schoolhouse Door".

On November 15–20, 1963, in Dallas, Texas, Wallace announced his intention to oppose the 35th U.S. President, John F. Kennedy, for the Democratic nomination for President. Days later in Dallas, Kennedy was assassinated.

Wallace ran for President in the 1968 election as the American Independent Party candidate,

Wallace pledged to pull out of Vietnam withing 90 days in office.

'Wallace pledged an immediate withdrawal of U.S. troops ... Wallace described foreign aid as money 'poured down a rat hole' and demanded that European and Asian allies pay more for their defense."

Wallace chose former Air Force General Curtis LeMay of California. LeMay was considered instrumental in the establishment in 1947 of the United States Air Force and an expert in military affairs. His four-star military rank, experience at Strategic Air Command and presence advising President Kennedy during the Cuban Missile Crisis.

To keep LeMay on the ticket, Wallace backer and Texas oil tycoon H.L. Hunt set up a million-dollar fund to reimburse LeMay.

Wallace said, "There's not a dime's worth of difference between the Republicans and Democrats," a campaign slogan that he had first perfected.

Wallace defeated Brewer in the runoff. The day after the election, he flew to Wisconsin to campaign for the upcoming 1972 U.S. presidential election.

On January 13, 1972, Wallace declared himself a Democratic candidate, entering the field with George McGovern, 1968 nominee Hubert Humphrey, and nine other Democratic opponents. In Florida's primary, Wallace carried every county to win 42 percent of the vote;

For the next four months, Wallace's campaign proceeded extremely well. However, it came to an abrupt halt on May 15, 1972, when he was shot five times by Arthur Bremer while campaigning at the Laurel Shopping Center in Laurel, Maryland.

Laurel Shopping Center is an open-air shopping complex located in Laurel, Maryland, on U.S. Route 1 just south of Maryland Route 198, and is positioned next to the Towne Centre at Laurel.

Laurel is a city in northern Prince George's County, Maryland, in the United States, located midway between Washington, D.C., and Baltimore on the Patuxent River.

Named for Prince George of Denmark

The Department of Defense is a prominent presence in the Laurel area today, with the Fort Meade Army base, the National Security Agency, and Johns Hopkins University's Applied Physics Laboratory all located nearby.

From the 1950s until the 1970s, the Fort Meade radar station had various radar equipment and control systems for air defense.

(the 8th Battalion (Hawk) was at the fort in late 1964.) Fort Meade bomb disposal experts were dispatched to secure nuclear bombs in the 1964 Savage Mountain B-52 crash.

Fort George G. Meade[4] is a United States Army installation that includes the Defense Information School, the Defense Media Activity, the United States Army Field Band, and the headquarters of United States Cyber Command, the National Security Agency, the Defense Courier Service, and Defense Information Systems Agency headquarters. It is named for George G. Meade, a general from the U.S. Civil War, who served as commander of the Army of the Potomac. The fort's smaller census-designated place includes support facilities such as schools, housing, and the offices of the Military Intelligence Civilian Excepted Career Program (MICECP).

Distance from Laurel Shopping center to Fort Meade is 5.5 miles