E.U. Threatens to Require Americans to Get Visas, Report Says

Note to communist cunts in Europe!

THE TPP IS GETTING CANCELED AND NO "EUROPEANS" WILL BE ALLOWED IN THIS COUNTRY WITHOUT SECURITY CHECKS!

NOBODY WANTS TO GO TO EUROPE ANYMORE YOU'RE A THIRD WORLD HELL HOLE!

ALL THAT HUMAN GARBAGE THAT YOU LET INTO YOUR COUNTRIES IS NOT COMING HERE! SO YOU CAN FORGET ABOUT FREE MOVEMENT. YOU'RE NOW THE TRASH OF THE HUMAN RACE AND YOU'RE GOING TO STAY THAT WAY UNTIL YOU GET RID OF YOUR RAPEFUGEES! 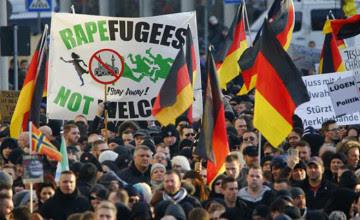 European Union officials may require U.S. and Canadian citizens to apply for visas before traveling to member states, according to a report.

The threat, reported by Reuters and attributed to anonymous sources, comes as the E.U. negotiates a trade agreement with the U.S. While most European citizens can enter the U.S. under a visa waiver program, U.S. officials have refused to lift visa requirements for citizens of some European countries including Romania, Bulgaria and Poland.

DO NOT EVEN TRY TO DUMP THAT RAPIST FILTH IN OUR COUNTRY THROUGH THE VISA PROGRAM! IF WE CATCH YOU DOING THAT THERE WILL BE HELL TO PAY!