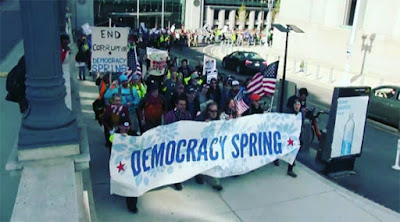 Right now at this very moment BOTH parties are stealing the election from voters and giving the nomination to party insiders!

It's a perfect time for a democracy movement! A REAL ONE! Which the CIA understands is coming, so they sent out a FAKE one to co-op the real one that should be happening LIKE THEY ALWAYS DO!

This is the exact same thing they did with BLM. The CIA could see that there was a REAL movement forming against the police state so they created BLM to save the day and divide the public ALONG RACIAL LINES so whites and blacks couldn't get together to fight the tyranny!

The globalists have to stay ahead of the public. When they see a push back coming they ALWAYS create a fake movement to sabotage the real one!

They do this in every single country on Earth!

What to expect with the new CIA employed fakers? Well they'll DIVIDE along racial and economic lines. They'll be real noisy! They'll receive glowing reports from the media and they'll totally ignore the theft going on RIGHT NOW in the primary! It will all be about money, equality, inclusiveness, racism blah blah blah! All the buzz words that comes out of the lying mouths on the left!

If they aren't talking about the delegate scams they are not real period!

And they won't because they work for the globalists who are ALL BANKERS!

The left has been nothing but frauds right from the beginning!

I know the Trump supporters aren't going to fall for their ACT but I'm not sure if the Bernie supporters will. Hopefully not but they're not very bright so they probably will!