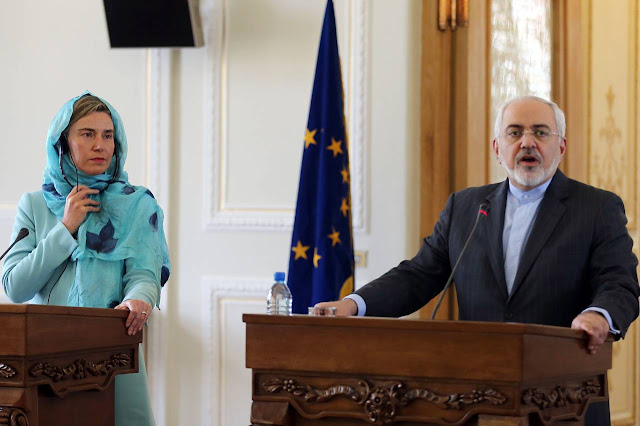 "Federica Mogherini was in Tehran on Saturday at the head of the largest delegation of EU officials to visit Iran in years. The two sides announced a string of joint projects—from the energy sector to MIGRATION and joint research work"

Super traitor Federica Mogherini is in Iran making a deal that probably goes something like this!

If you let our banks into your country will take millions of Iranian immigrants!

But she doesn't care about that her only requirement is to let the banks in! I can't believe how naive people are about the left! If this woman is such a socialist how come she cares about the banks so much?

“The main message that I have delivered here is the fact that we Europeans have as much as an interest as the Iranians that this issue is solved,” she said in a sit-down with a small group of reporters later. “We have an economic interest also in coming back here as the first trading partner…In order to do that we need our banks to be present here.”

WE NEED OUR BANKS TO BE PRESENT HERE!

It's NOT TRUE that Europe can't do business in Iran without their banks moving there!

“All we’re asking the United States isn't to interfere and to assure…international banks that they will not be fined again illegally for doing business with Iran,” he said."

So lift the restrictions on international banks! All because of Iran? I doubt it. We're back in the banking fraud business and they're going to use "trade" with Iran as and excuse to get rid of the laws we put on them because of the 2008 banking crisis!

I got to hand it to the left! They are experts at making everything they do look like a humanitarian mission!

She's helping the international banks run a muck again! There's nothing humanitarian about that!

It looks like there's another banking crisis is right around the corner. Secret Central bank meetings, weird statements from the IMF and JP Morgan Chase!

The banking snake has digested it's food from 2008! The snake is hungry again so get ready it's coming soon!