Is the mainstream media encouraging violent attacks against Trump and his supporters? 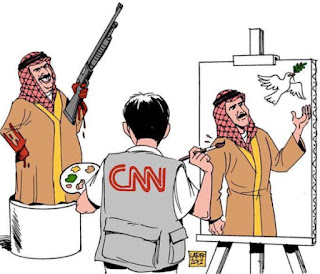 This CNN article is a good example of how they do that.

First off they deliberately under estimate the Trump's crowd numbers.

What CNN says about riots at Costa Mesa!

The definition of "several" is...

adjective
The definition of several is more than two but a small number, or separate people or things.
pronoun
Several is defined as a small, undefined number that is greater than two.
Dictionary link

A SMALL number but more than two!

How many people were at the Trump rally last night?

"Since its reopening, the venue rarely uses the "lawn" area, effectively reducing seating capacity from approximately 10,000 to 8,500."

Here's a video of the Trump rally. You can clearly see they used the "lawn area" so we can safely say it was FULL. That's 10,000.


AND there was thousands of people outside that couldn't get in so a fair number would be 13,000.

So we have 13,000 Trump supporters which is CLEARLY not SEVERAL thousand! Now how many anti Trump protesters did we have?

CNN says hundreds which looks about right. Around TWO hundred...

But then CNN goes on to call them "protesters" instead of rioters!

"While some demonstrators shouted insults and slurs at police officers, others focused on delivering a message of protest against the Republican front-runner's rhetoric."

Like they have a reason for rioting! CNN has consistently done this!

"Rojelio Banuelos, a 26-year-old student, carried a sign that read, "Liberation not deportation."

"I'm against Trump's nativist and nationalistic agenda, which divides people and is very hateful of the other," he said."

While Banuelos simply marched through the streets, he called the property damage and anger some demonstrators expressed Friday night "the symptom of hate speech" and said he did not believe any individuals were taking advantage of the protest.

Katie Brazer, a 26-year-old community organizer who marched alongside Banuelos, agreed.
"I think people are tired of these messages of hate," she said.

So as anyone can see CNN approves of these thugs rioting over Trump supporters free speech rights!

We need violent riots at CNN's headquarters in Atlanta! Because we don't like CNN's  rhetoric so let's go fuck them up!

Link to their address