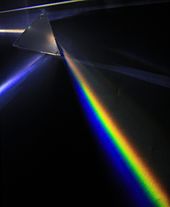 The visible spectrum is the portion of the electromagnetic spectrum that is visible to the human eye. Electromagnetic radiation in this range of wavelengths is called visible light or simply light. A typical human eye will respond to wavelengths from about 390 to 700 nm. In terms of frequency, this corresponds to a band in the vicinity of 430–770 THz.

Violet is a spectral color – it occupies its own place at the end of the spectrum of light first identified by Newton in 1672, and it has its own wavelength (approximately 380–420 nm) – whereas purple is a combination of two spectral colors, red and blue. There is no such thing as the "wavelength of purple light"; it only exists as a combination. 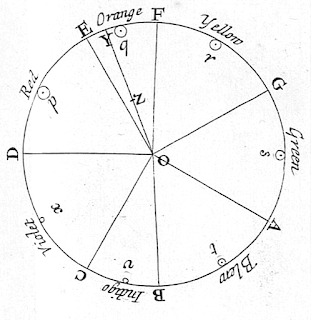 Newton's color circle, from Opticks of 1704, showing the colors correlated with musical notes.

As early as the 15th century BC the citizens of Sidon and Tyre, two cities on the coast of Ancient Phoenicia, (present day Lebanon), were producing purple dye from a sea snail called the spiny dye-murex. 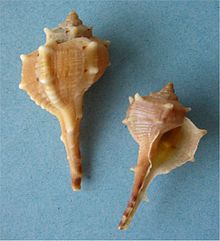 It was one of the most important Phoenician cities, and may have been the oldest. From here, and other ports, a great Mediterranean commercial empire was founded. Homer praised the skill of its craftsmen in producing glass, purple dyes,

Tyre is an ancient Phoenician city and the legendary birthplace of Europa.

In Greek mythology Europa was the mother of King Minos of Crete, a woman with Phoenician origin of high lineage, and for whom the continent Europe was named. The story of her abduction by Zeus in the form of a white bull was a Cretan story 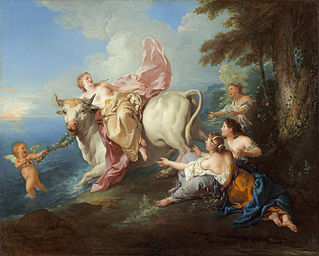 Bolinus brandaris (originally called Murex brandaris by Linnaeus), and commonly known as the purple dye murex or the spiny dye-murex. This was the mollusc species used by the ancients to produce Tyrian purple fabric dye.

The word 'purple' comes from the Old English word purpul which derives from the Latin purpura, in turn from the Greek (porphura),

The first recorded use of the word 'purple' in the English language was in the year 975 AD. In heraldry, the word purpure is used for purple.

There is at least one instance of it being blazoned as "Imperial Purple". One of the most expensive colors to acquire in ancient times, Tyrian purple was used in the war banner of Byzantine Emperor Komnenos: Purpur (porphyr red) a double-headed eagle displayed Or..
https://en.wikipedia.org/wiki/Purpure

Tyrian purple became the color of kings, nobles, priests and magistrates all around the Mediterranean. It was mentioned in the Old Testament; In the Book of Exodus, God instructs Moses to have the Israelites bring him an offering including cloth "of blue, and purple, and scarlet.", to be used in the curtains of the Tabernacle and the garments of priests.

King Solomon was reported to have brought artisans from Tyre to provide purple fabrics to decorate the Temple of Jerusalem.

The Emperor Caligula had the King of Mauritania murdered for wearing a purple mantle better than his own. Nero made it punishable by death for anyone else to wear the color.

Jesus, in the hours leading up to his crucifixion, was dressed in purple by the Roman garrison to mock his claim to be 'King of the Jews'

Through the early Christian era, the rulers of the Byzantine Empire continued the use of purple as the imperial color, for diplomatic gifts, and even for imperial documents and the pages of the Bible. Gospel manuscripts were written in gold lettering on parchment that was colored Tyrian purple. Empresses gave birth in the Purple Chamber, and the emperors born there were known as "born to the purple,"

In western Europe, the Emperor Charlemagne was crowned in 800 wearing a mantle of Tyrian purple, and was buried in 814 in a shroud of the same color, 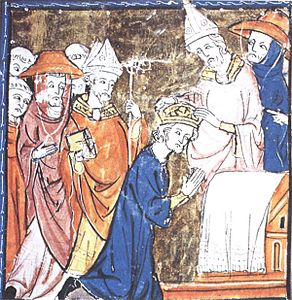 In the concentration camps of Nazi Germany, prisoners who were members of non-conformist religious groups, such as the Jehovah's Witnesses, were required to wear a purple triangle.

"And the LORD said unto me, A conspiracy is found among the men of Judah, and among the inhabitants of Jerusalem"

During the 1960s and early 1970s, it was also associated with counterculture, psychedelics, and musicians like Jimi Hendrix with his 1967 song "Purple Haze", or the English rock band of Deep Purple which formed in 1968. Later, in the 1980s, it was featured in the song and album Purple Rain (1984) by the American musician Prince.

The Purple Rain Protest was a protest against apartheid that took place in Cape Town, South Africa on 2 September 1989, in which a police water cannon with purple dye sprayed thousands of demonstrators. This led to the slogan The Purple Shall Govern. 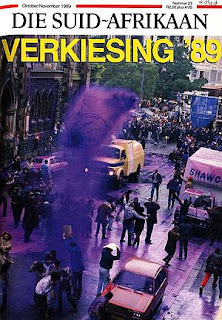 Hematite and manganese are the oldest pigments used for the color purple. They were used by Neolithic artists in the form of sticks, like charcoal, or ground and powdered and mixed with fat, and used as a paint. Hematite is a reddish iron oxide which, when ground coarsely, makes a purple pigment. Manganese was also used in Roman times to color glass purple. 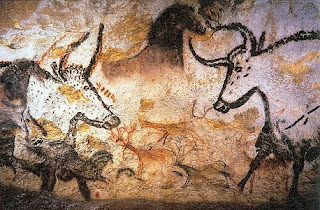 Manganese pigments were used in the neolithic paintings in the Lascaux cave, France.

In Europe and America, purple is the color most associated with vanity, extravagance, and individualism. Among the seven major sins, it represents vanity. It is a color which is used to attract attention.

The color purple plays a significant role in the traditions of engineering schools across Canada. This fascination with purple is commonly attributed to the story of the sinking of the Titanic, in which the purple-clad Marine Engineers remained on board to delay the ship's sinking, Purple is also the colour of the Engineering Corp in the British Military.

In the English language, the word "purple" has only one perfect rhyme curple.

The hindquarters or the rump of a horse, a strap under the girth of a horse's saddle to stop the saddle from kicking forward.

In Major League Baseball, purple is one of the primary colors for the Colorado Rockies.

In the National Football League, the Minnesota Vikings and Baltimore Ravens use purple as main colors.

In the game of pool, purple is the color of the 4-solid and the 12-striped balls.