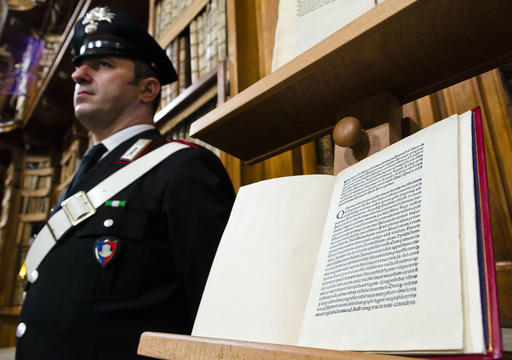 WILMINGTON, Del. - Charles M. Oberly, III, United States Attorney for the District of Delaware, announced today that a historic letter dating from 1493 and detailing Christopher Columbus’ voyage to the Americas was repatriated back to Italy at a repatriation ceremony held at 11:00 a.m. CET at the Bibliotecha Angelica, in Rome, Italy.  Known as a “Plannck II” edition, this Columbus Letter had been stolen on an unknown date from a library in Florence, Italy, and subsequently donated to the U.S. Library of Congress in 2004.  This theft and forgery was discovered in 2012, and today’s repatriation culminates joint Italian/U.S. efforts to return the original letter.

“This repatriation is the result of the joint efforts of this office, HSI special agents assigned who are assigned to investigate cultural property theft, the Department of Justice Office of International Affairs, the Library of Congress, and the Carabinieri Tutela Patrimonio Culturale in Rome,” said U.S. Attorney Charles M. Oberly, III.  “I commend all parties for their efforts in producing this positive outcome – particularly given the historical significance of this document.  Documents such as the ‘Plannck II’ Columbus Letter are of significant cultural value as they provide historical facts about critical events in world history, and we are humbled to return this historic document back to its home country.”

By Ishaan Tharoor May 18

A stolen copy of a rare 15th-century letter written by Christopher Columbus was repatriated to Italy this week and unveiled in a ceremony in Rome that was attended by U.S Ambassador John Phillips and Italian Culture Minister Enrico Franceschini.

The irony of the missive finally making its way back from the New World, centuries after the first journey, was not lost on Rome.

"It is interesting how 500 years after the letter was written it has made the same trip back and forth from America," Franceschini, the Italian culture minister, said.

My work on Christopher Columbus

YouTube video
Stolen Columbus Letter Returned By Library Of Congress To Italy
Video.. Note the reference to the AP article time @ 0:03 seconds into the video.. It says "Reported by AP Entertainment May 18 3:33 AM

A reprinted copy of Christopher Columbus original letter written in 1493 about the discovery of the New World is displayed during a press conference in Rome, Wednesday, May 18, 2016. The United States has returned to Italy a letter written by Christopher Columbus in 1493 about his discovery of the New World that was stolen from a Florence library and unwittingly acquired by the Library of Congress.