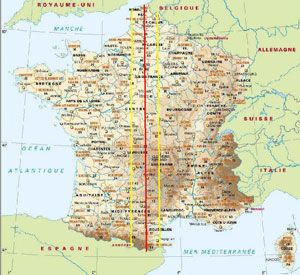 The Paris meridian is a meridian line running through the Paris Observatory in Paris, France—now longitude 2°20′14.03″ east. It was a long-standing rival to the Greenwich meridian as the prime meridian of the world. 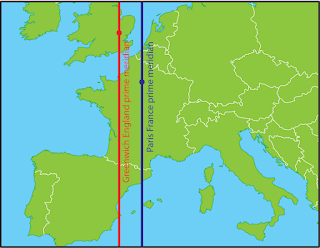 In the year 1634, France ruled by Louis XIII and Cardinal Richelieu decided that the Ferro meridian should be used as the reference on maps, since this island is the most western position of the Old World. It was also thought to be exactly 20 degrees west of Paris. 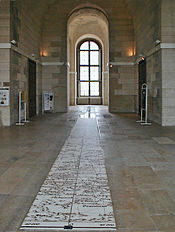 A French astronomer, Abbé Jean Picard, measured the length of a degree of latitude and computed from it the size of the Earth during 1669–1670. In 1666, Louis XIV of France had authorized the building of an observatory in Paris to measure longitude. On Midsummer's Day 1667, members of the Academy of Sciences traced the future building's outline on a plot outside town near the Port Royal abbey, with Picard's meridian exactly bisecting the site north-south. French cartographers would use it as their prime meridian for more than 200 years.

Old maps (outside of Anglo-America) often have a common grid with Paris degrees at the top and Ferro degrees offset by 20 at the bottom. Louis Feuillée also worked on this problem in 1724. It was later found that the actual island of El Hierro itself is in fact 20° 23' 9" west of Paris, but the Ferro meridian was still defined as 20 degrees west of Paris. 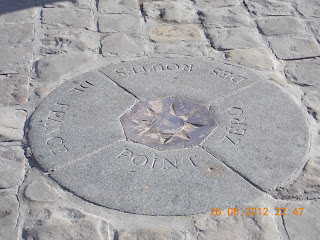 In the early 19th century, the Paris meridian was recalculated with greater precision by the astronomer François Arago, whose name now appears on the plaques or medallions tracing the route of the meridian through Paris. 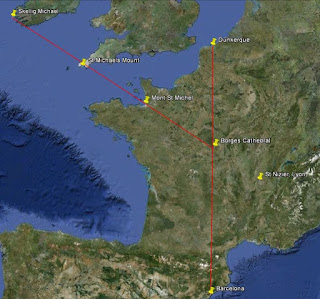 In 1994 the Arago Association and the city of Paris commissioned a Dutch conceptual artist, Jan Dibbets, to create a memorial to Arago. Dibbets came up with the idea of setting 135 bronze medallions (although only 121 are documented in the official guide to the medallions) into the ground along the Paris meridian between the northern and southern limits of Paris: a total distance of 9.2 kilometres/5.7 miles. Each medallion is 12 cm in diameter and marked with the name ARAGO plus N and S pointers.

n certain circles, some kind of occult or esoteric significance is ascribed to the Paris meridian; sometimes it is even perceived as a sinister axis. Dominique Stezepfandts, a French conspiracy theorist, attacks the Arago medallions that supposedly trace the route of "an occult geographical line"; to him the Paris meridian is a "Masonic axis" or even "the heart of the Devil."

Henry Lincoln, in his book The Holy Place, argues that various ancient structures are aligned according to the Paris meridian. They even include medieval churches, built long before the meridian was established according to conventional history, and Lincoln finds it obvious that the meridian "was based upon the 'cromlech intersect division line'." David Wood, in his book Genisis, likewise ascribes a deeper significance to the Paris meridian and takes it into account when trying to decipher the geometry of the myth-encrusted village of Rennes-le-Château: The meridian passes about 350 meters (1,150 ft) west of the site of the so-called "Poussin tomb," an important location in the legends and esoteric theories relating to that place.

The History of Earth Measurement in France.

A clue of the relevance of Delambre to our story besides his mention in his writings of the mountain of Soularac (Solar Rock) can be found in his full name - Jean Baptiste Joseph chevalier Delambre for he was a member of the chivalric Order of Saint Michael (Ordre de Saint-Michel) . This Order is the oldest Royal order of chivalry in France founded by Louis XI on August 1st 1469, It was began in France by Jean Fouquet. The statutes provided that the knights should meet annually on the feast of their patron the Archangel Michael which is of course the 29th September (Michaelmas)[i2] at the chapel of the monastery of Saint Michael off Normandy which has the nearest city of Rennes close by.  The British have the Order of Saint Michael and Saint George founded in 1818 and the two orders are not to be confused and have no direct affiliation but do show a common reverence to the same archangel.