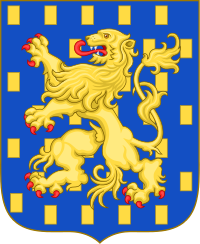 Arnold was the second son of Count Dudo-Henry of Laurenburg (German: Dudo-Heinrich von Laurenburg) and Anastasia of Arnstein, daughter of Count Louis II of Arnstein. Count Dudo, considered the founder of the House of Nassau, had already built the castle of Laurenburg around 1080, and laid the foundations of Nassau Castle in present day Nassau, Germany, around 1100. After 1120, Arnold ruled from Nassau Castle together with his brother Robert I.

"Arnold I of Laurenburg" in the English Reduction system equals 96/213/1278/895
Thirty Three, Judas, The Quantum Number

The name of Arnold's wife is unknown. He had two, and perhaps, 3 children

House of Nassau...Bloodlines.. Part One