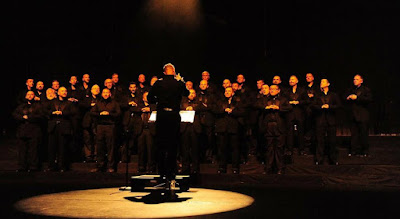 Saturday night, 100 singers from the San Diego Gay Men's Chorus took the field at Petco Park to sing the national anthem — and never got the chance.

Instead of their voices over the PA system, fans of the Padres and Los Angeles Dodgers heard a recorded voice of a woman singing the anthem. When the group stepped off the field at the end of the song it was to taunts such as, "You sing like a girl," according to a statement on the San Diego Gay Men's Chorus Facebook page, but also to clapping and apparently good-natured comments from fans, according to a video from one attendee.

On that video, one fan jokes, "It was all in unison, it was perfect, one voice, it was amazing."

One of the singers replies on video, "We're so insulted," but it was hard to tell by his tone if he was joking or seriously upset. The man whose brother took the video wrote on Twitter, "There was maybe 1 guy who was upset. Most understood it was an honest mistake."

By Sunday night, the Padres were saying on Twitter that the team had investigated the issue, found no malicious intent and terminated the contractor "who was responsible for the error" and disciplined the employee responsible for the game production. In a statement, the team reiterated its "commitment to inclusion" and said it deeply regrets anyone questioning that but accepts "full responsibility." It was the team's second social-media apology of the day.

Union-Tribune sportswriter Kirk Kenney reported that a taped version of the anthem "was to be played with the performers on the field" Saturday and that the woman's voice was believed to be that of Friday's anthem singer.